Pick up at a local BestBuy

Leave blank to deliver to your address

Notify me when back in stock

Find a Dealer Nearby
Pedal Assist

The Pace 500 comes in 2 sizes to suit most adults. *Aventon has the right without notice to the consumer to substitute components of at least equal quality for advertised Aventon ebike components in the event of the unavailability of such advertised components. More info

Aventon Fanttik Portable Air Pump
36 reviews
$149.99
SHOP NOW
The X8 Apex Air multi-purpose inflator handles any inflation need, anywhere. Fitting in the palm of your hand, it can inflate devices up to 150 PSI or 10-bar. Inflation is as easy as its deflate function, and with a built-in light, the rechargeable X8 Apex Air inflator can be used...

Aventon Rear Rack - Pace 350.2 / Pace 500.2
302 reviews
$44.99
SHOP NOW
Description Our rear rack was designed and built by Aventon engineers to fit your Pace 500.2 & Pace 350.2 ebikes like a glove. You MUST order the model and size that matches your Aventon ebike model and size. Features Beautifully crafted from strong, lightweight aluminum for a lifetime of use....

Aventon Pace 500.2/350.2 Fender Set
267 reviews
$44.99
SHOP NOW
Description FOR PACE.2 MODELS ONLY.  Unsatisfied with the generic fenders out there, our design team went to work to curate the perfect set to match the sleekness of Pace.2. Ready to face the elements, each fender is engineered to be a perfect fit on your Aventon Pace.2 ebike. Features Stay dry...

Aventon Phone Holder Large
3 reviews
$11.99
SHOP NOW
Description Never worry about misplacing your phone on a bike ride or not having it in plain sight mid-ride. The Aventon Phone Holder attaches to your handlebar and securely holds your smartphone while offering a minimalist profile and design. Features Universal handlebar compatibility Quick release bracket 360 ° rotation Fits most...

Thousand Heritage Helmet
39 reviews
$99.00
SHOP NOW
Description The sleek Heritage is the ultimate helmet for the modern urbanite: minimalist in design and engineered for productivity. Its magnetic buckle makes fastening with one hand a pinch-free breeze, while vents are meticulously crafted to continuously keep a rider cool. Features Eco-friendly vegan leather straps Adjustable dial system for...

Burley Bee Child Trailer
11 reviews
$379.95
SHOP NOW
Description Never sacrifice safety or durability on your family adventures with Burley's iconic lightweight, bike-only trailer. Features comfortable seating for one or two children, designed to share your love for the great outdoors with your little ones.  Features Compact fold flattens the trailer for easy storage and transportation Tinted side and...

“Most Bang For Your Buck”

“I understand the demand” The Next-Gen Pace 500 ebike is an upgrade to its award-winning predecesor and still the ultimate balance of comfort and power. Features the upright cruiser frame geometry and handlebars that riders have come to love about the Pace plus an improved battery that is now fully integrated into the frame along with integrated rear and front lights. The perfect ebike for a casual cruise that can still pack some power.

EBIKE TO YOUR PHONE 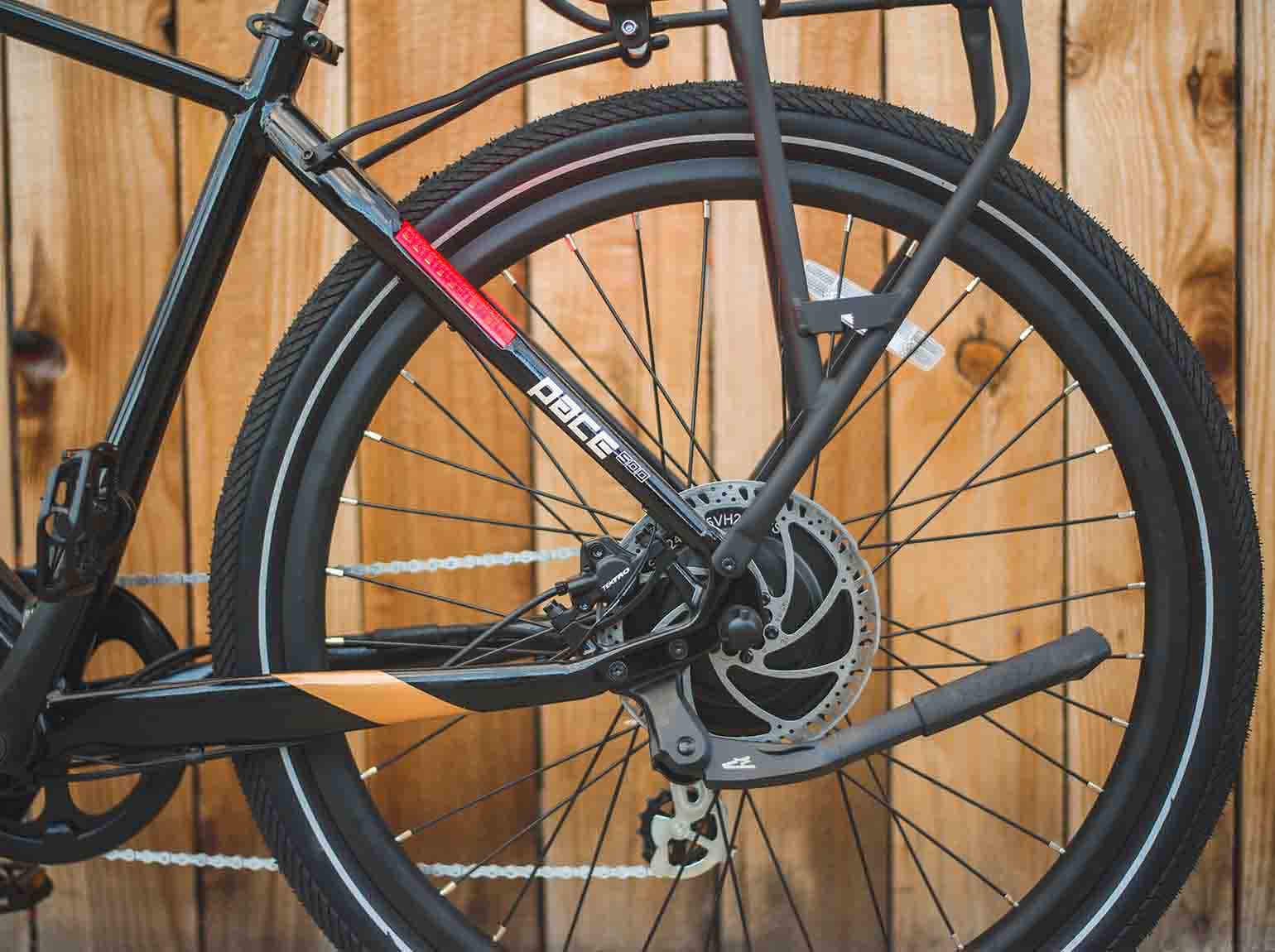 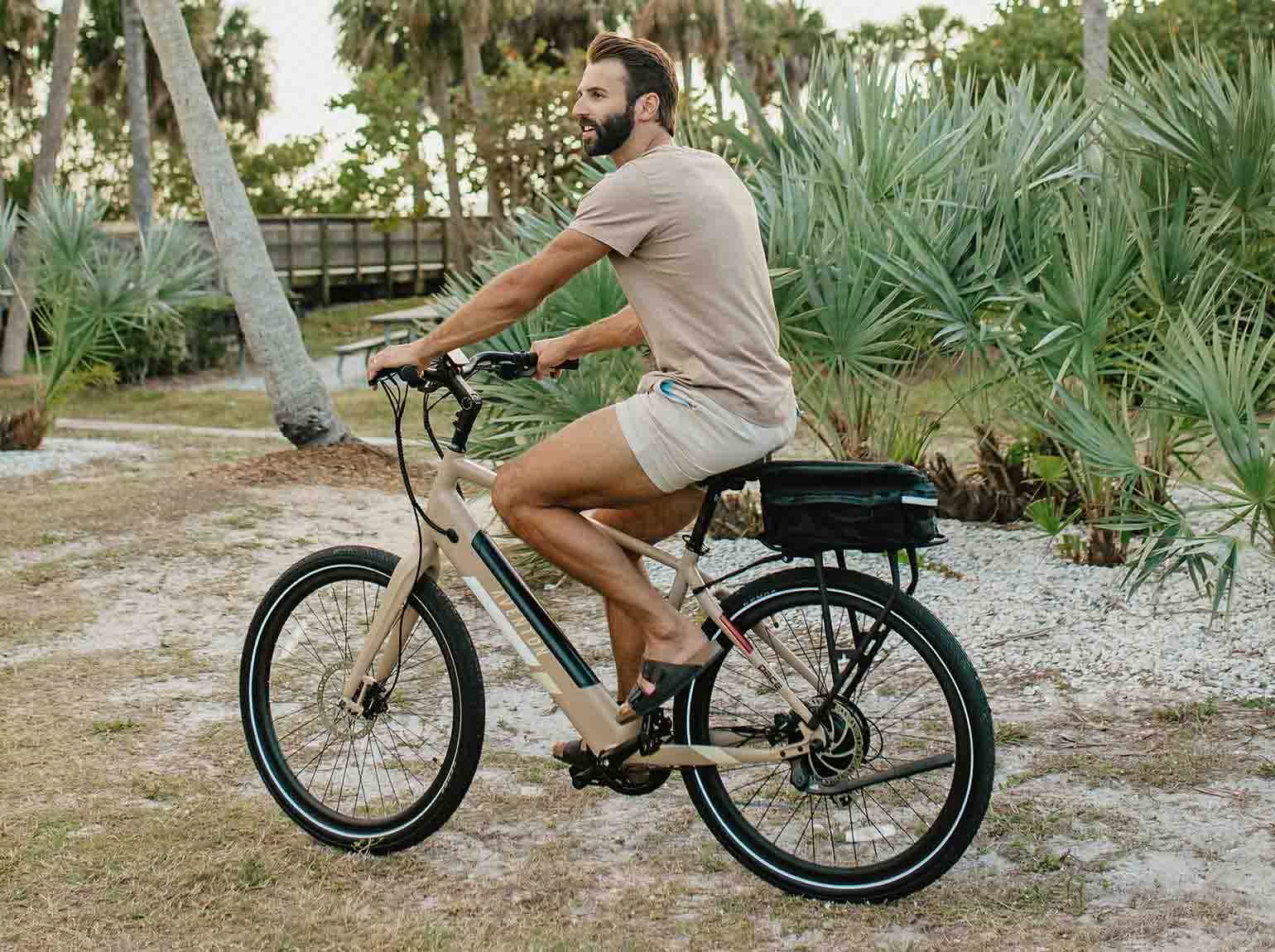 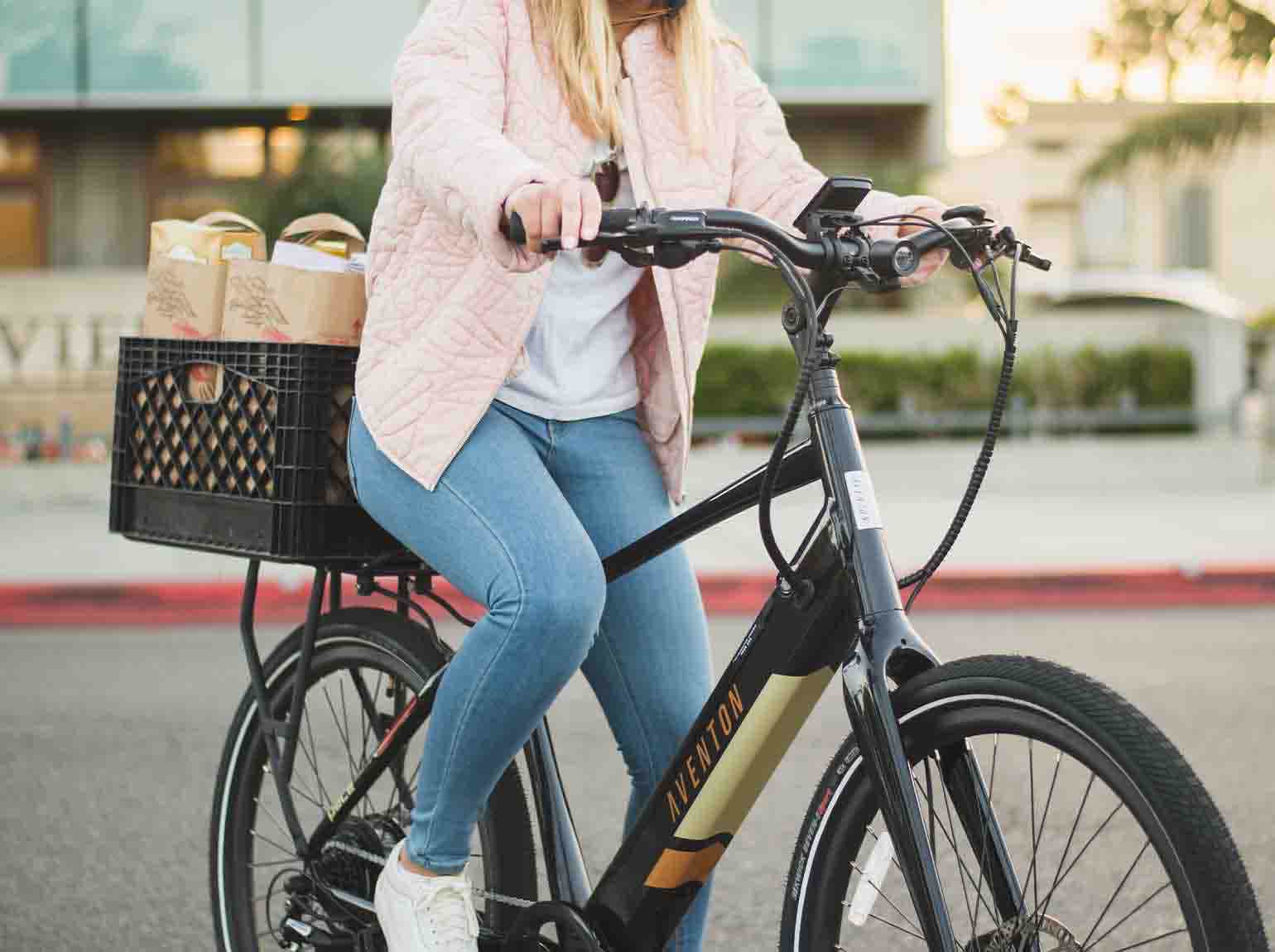 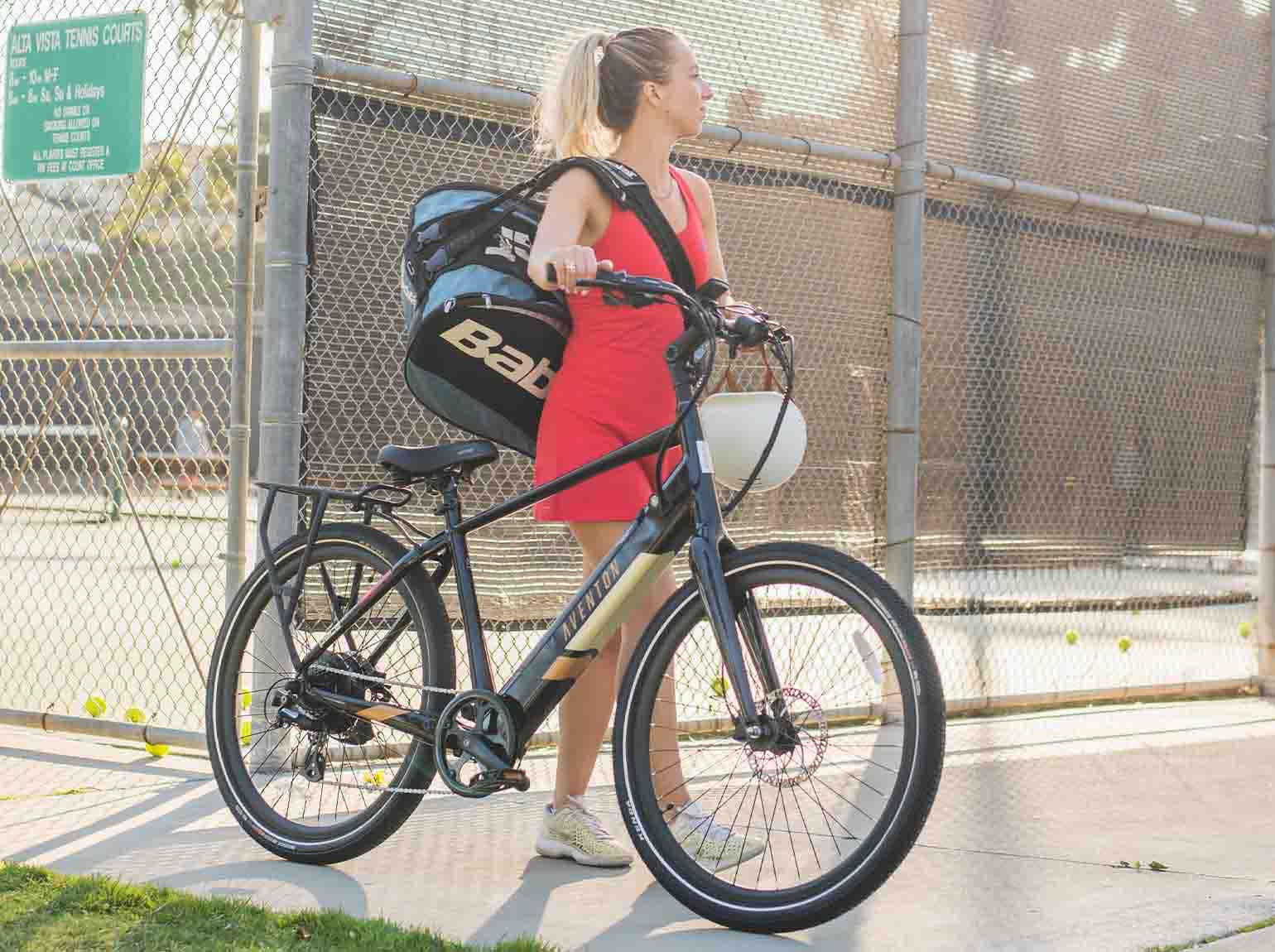 I purchased a Pace 500.2 step through for my wife for Christmas, and a couple of weeks later she bought me the Pace 500.2 regular model. I have been riding a Giant Yukon since 1992 (same bike and still rides like new) and I was a bit nervous about going to a cruiser style bike, but I LOVE THIS BIKE! I love it so much that I gave my Yukon to my youngest son as I simply did not need to go back to it.

Although this is a cruiser, the totally adjustable handlebar system allows you to adjust the handlebars to be forward, backward, or up/down based on how you want to sit on the bike. Both me and my wife adjusted our bars many times over the first two weeks in order to find that sweet spot, but this is the only bike I have ever seen that provides 100% adjustment in the handlebars.

The handlebars, while on the topic, have an odd design in that they are very fat near the stem and then get narrower. This is very stylish but does limit the number of accessories that you can add (although in truth, the handlebars are fairly tight with the required accessories like the shifter, throttle, etc.). So on my bike I added an aux bar that I highly recommend (it is 11.8 inches long and $9 on Amazon -- and made of aluminum too).

We also adjusted our displays so that they are below the top of the handlebars instead of sitting above them, and moved my headlamp to be below the bar instead of over it. In both cases we are trying to protect the items in case of falls.

There is enough room to add a small ding-ding bell next to the throttle if you wish (and we did wish!).

It is interesting that when we tell people we have ebikes they seem to imply that we don't exercise now. However, with our new ebikes we travel faster, and further, and bike longer, than we ever did with our regular bikes. We used to move along fairly slowly, maybe at 9 mph (avg), for a 5 or 10 mile ride. Now we move along at 14 mph (avg) at a level 2, pedaling 100% of the time, and can go for 20 or 25 miles without fatique. That results in us being outside more, being aerobic longer, and just having plain fun! Oh, and a few weeks ago we were camping in Charlotte and rode through some very hilly country that we could NOT have done on our old bikes. I was on level 5, gear 1, and about to pass out going up one of these hills ... and still barely moving ... but we made it! In fact, we rode up that hill four times because it just felt good to do it! (Note: I am over 200 lbs and my wife is about half that weight -- her Pace 500.2 had no issue on the hill...apparently she is right in that I need to lose a few more pounds! LOL).

Sizing: I purchased the Pace 500.2 standard in the regular size. I am 5' 10" and have short legs and it works great for me. I rode the large size and it just seemed too tall. My wife is 5" 2", and she purchased the small step through version and it works great for her. Both of us added the Aventon suspension seat posts (which we love), which are actually Suntour NCX posts. We also added Ibera rear rack and Ibera PakRak bag. We purchased the model designed for bikes with disc brakes and it worked great on my bike. On the step through bike we had to add on $10 Ibera 11" extension rods because the rack was too close to the seat otherwise. Photos of the handlebar extension bar and PakRak are attached. The third photo is just a nice spot we rode to!

Things that I don't like (and there are very few):

1. I wish they sold a glass screen protector. I found one on Amazon for a camera that will cover the main part of the screen, and I hope that, in combination with a screen bumber (sold by Aventon), the screen will be safe.

2. I wish they sold touch up paint. The dealer added two scratches while adjusting the front tire, and we added a third, and now our one month old bike does not look new. We have found some paint sold by 3rd parties that may help, but it would be better if Aventon sold it so that we were more sure it would match.

3. We wish they had put screws for a water bottle. Every bike has them and for some reason they failed to include them on the Pace 500.2 (step through and standard versions). 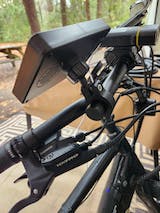 Thank you for leaving a detailed review! We appreciate the feedback! Happy riding!

Purchased my bicycle on line and put together on my own. Took longer than the folks on YouTube but everything fit as described and parts all fit as shipped. Had some purchasing issues- mine not Aventon’s and their customer support team, special thanks to Mandy, couldn’t be better. Oh yeah love my ride.

Hey Jerry! Thank you for taking the time to leave feedback on your recent experience with us. Cheers to many great rides and welcome to the Aventon Family!

Have been a new owner of a Pace 500.2 for two weeks now and have rediscovered how much fun bike riding can be. Enjoying it so much that we are looking at getting another for my wife.

Thank you for leaving a review! We are happy to hear this worked for you, happy biking!

This is the one I've been looking for, just right for my height (5'8"). Also, the assist pedal throttle helps a lot when biking in our hilly community. I wish the Aventon display can be easily removed when you have to leave your bike and go shopping. 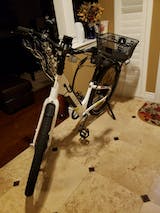 Thank you for taking the time to leave feedback on your new e-bike! Cheers to many great rides and welcome to the Aventon Family!

Hi Casey, thank you for the review!