Taking a historic ride down memory lane, we’re sharing the story of the first electric bike shop in Los Angeles! Born and bred in Berlin, Germany, and now rooted in the greater Los Angeles, California area, Bike Attack is a pioneering figure in the e-mobility movement. In addition to being the first ebike shop in LA, Bike Attack has a rich founding history that’s transversed two continents, having now established itself as a trusted staple in the community. With two prominent locations in Santa Monica and Playa Vista, we had the absolute pleasure to speak with one of Bike Attack’s owners, Kitty!

Originally from Germany, Kitty initially crossed paths with her husband, Ericson, in Venice Beach, CA, years before they’d create Bike Attack. Working as a sound editor in the film and business industry in Berlin, Hollywood was everything Kitty dreamed of and more. Meanwhile, Ericson was actively employed by the U.S. Army. With life eventually taking the duo to Germany together, they’d soon discover the opportunity to shift their career priorities from what they had to do, to what they wanted to do.

Ericson always had a passion for two-wheels; From riding bikes since childhood into BMX riding into adulthood, bicycling was one of his biggest hobbies. His biggest dream? One day opening his own bike shop. While stationed in Berlin, Ericson worked at the “Outdoor Rec” facility, where he looked after the bicycle area for all of the stationed soldiers. He quickly saw promotional success because of his work ethic and bike knowledge, and when the US Army left Germany, Ericson had the opportunity to convert the former recreational space and bring his dream of owning a bike shop to life.

Founded in 1995, Bike Attack quickly became recognized as an exemplary bicycle retail store for its outstanding service, eventually seeing massive success in the European market. Despite this, both Kitty and Ericson’s dreams were to eventually return to the US. More so, knowing how the demand for ebikes skyrocketed in Germany, it would just be a matter of time before this momentum reached America.

So, while most go to Hollywood to pursue their dreams of film and movies, in hindsight, Kitty returned to pursue greater opportunities in the cycling industry. In 2000, the duo opened Bike Attack in Venice Beach, CA, becoming among the first to retail electric bikes in the nation. As they opened additional locations in Santa Monica and Playa Vista, they realized they’d need some extra hands to help maintain their exemplary standards for their shoppers. While their employees didn’t quite live up to their expectations, Kitty quickly (and eagerly!) stepped in to assist, managing everything from website development to purchasing. Today, Bike Attack serves as a meeting point for all bike enthusiasts, whether it’s a hang-out spot for the urban biker, a place to mingle and meet, a safe space to ride together, or an outlet to learn about all things bicycles; At the center of Bike Attack’s lifestyle is living, working, and riding hard. 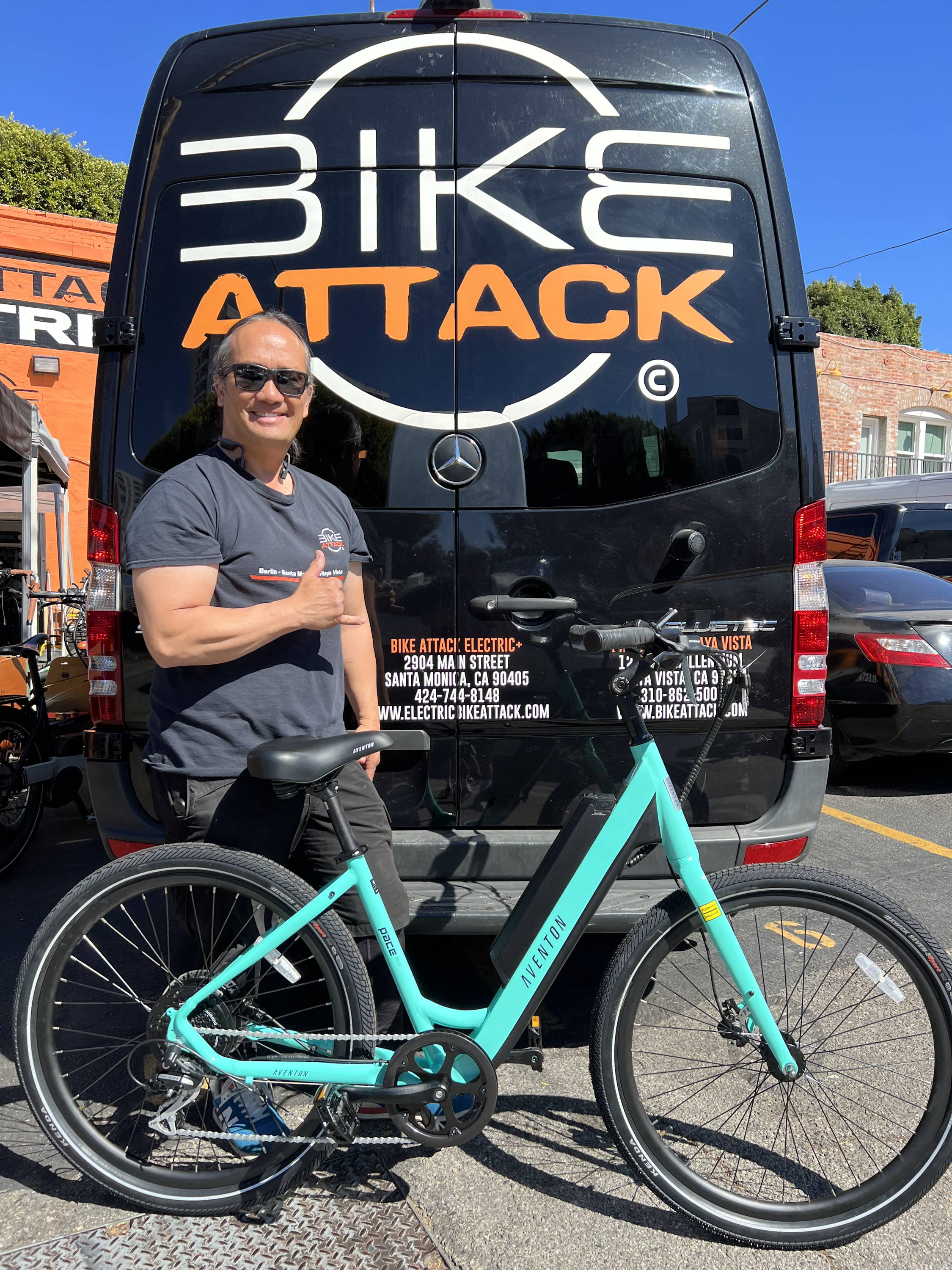 Being the first bike shop to retail ebikes in Los Angeles, Kitty and Ericson refused to shy away from new opportunities. They’d spend much of their early time sourcing new or up-and-coming brands that seemed to have promise. They’d experienced disappointment before, investing in brands that didn’t live up to expectations in the long run, resulting in being dropped. Among the new brands they saw promise in, was Aventon.

Ericson’s first reaction to seeing Aventon’s electric bikes at CABDA Expo in San Diego, California was one of astonishment; “Wow, these are great!” The duo met Andrew, one of Aventon’s sales representatives, and discussed more about the brand and the products. While these events tend to be loud and extremely fast-paced, Kitty and Ericson were impressed with the level of attentiveness Andrew displayed. Kitty recalls actually receiving Andrew’s business card when asking for one, saying that “Sometimes they don’t give you one because they’re all over the place at those events. But Andrew, he was serious. He got a hold of us, we ordered bikes and that’s how it went.” Joining Aventon’s movement when all we produced were high-performance fixed-gear bicycles, Bike Attack has been one of our earliest supporters and trusted retailers. And when we pivoted from traditional bikes to electric ones, they were nothing short of eager to encourage more people to ride.

What Kitty likes most about Aventon ebikes is the combination of high-quality and low prices. Bike Attack retails ebikes that range anywhere from $2,000 - $12,000 at most, to as low as $1500. While Aventon falls in the lower end of their price tiers, it competitively competes in quality with their higher price tier products. And Bike Attack’s best Aventon sellers? The Level. Kitty says, ‘Maybe it’s because we like them so much, we’re always telling people it's a good choice.” Oftentimes Pace customers will come in to test ride after seeing the bike online, and the staff at Bike Attack actually get them even more excited about the Level.2. Other Times, customers know they’d love to cruise at their own pace with a Pace, with it being Bike Attack’s next popular Aventon model.

The Power That Bike Attack Realized In Ebikes

Bike Attack knew of the massive potential ebikes would hold, long before Aventon’s decision to pivot into producing high-quality ebikes. They proudly sold and serviced ebikes in the era of ‘ebikes are cheating!,’ because they saw the possibilities when others hadn’t quite yet. Kitty says the business aside, ‘It’s very important that we get more people on bikes, whether e or not e, because it’s just the right thing. But ebikes have the advantages because you can get to work, commute, and things like that much quicker and easier.” Being a part of changing the American movements on mobility, transportation, and sustainability was crucial to Bike Attack, and they were steadfast in paving their way while others weren’t yet convinced.

What Sets Bike Attack Apart From The Rest

In addition to their passion for all things two-wheels and encouraging more people to get on ebikes, Bike Attacks offers quite a few extra shopping perks. Check out some of their added special services below!

Being the first electric bike shop in Los Angeles is something to be quite excited about. Especially when considering Bike Attack was also among the first few ebike retailers in the nation. Bike Attack wears this badge with honor and grace. After all, the expertise that comes with being in the business for that long is priceless. Shoppers can ease their worries because the team knows all there is to know about ebikes. Additionally, the entire staff at Bike Attack are avid bike riders, whether they commute to work, enjoy road cycling, are adventurous mountain bikers, or just enjoy electric bike riding. The shop and staff pride themselves in knowing the ins and outs of all things electric bikes, and never shy away from sharing that knowledge.

Ultimately, the selling factor when shopping for an ebike is a test ride, and Bike Attack has the entire Aventon fleet available for test rides. So, while consumers come in through their doors with an idea of what they’re looking for, with research in hand, it usually boils down to the test ride. This helps them realize whether an ebike is truly within their comfort zone or not.

Bike Attack stresses the importance of test rides because, at the end of the day, the only way you’re going to know if you love an ebike is if you ride it! The staff at Bike Attack also walk consumers through how to use an ebike’s features, so they’ll not only feel more confident riding the bike, but actually operating it too!

Having two full-service repair shops at both locations, Bike Attack knows a thing or two about fixing bikes. So much so, that they have 1 dedicated Service Manager whose sole focus is navigating warranty claims with manufacturers. Since they provide the larger LA community with bikes, they also take on a larger amount of repairs.

The technicians at Bike Attack are trained exceptionally. They not only know how all of the bikes in their inventory ride, but they know how to tear them apart and put them back together. This valuable knowledge even transfers to bikes they don’t always retail themselves. Often, customers will come in explaining a problem they’re having, and the team of mechanics already knows how to diagnose and resolve based on their extensive interactions with the bikes. Holding its service staff to these high standards not only continues to propel Bike Attack into the trusted community center but ensures its customer's experiences and happiness are always kept at the highest levels.

The technical training process at Bike Attack is very hands-on, in-house. They believe in training their team at the level of the bike itself. This means, that when in doubt, they always go back to the bike. Bike Attack often attends training and seminars from industry experts, like Bosch and Shimano, to routinely stay up to date on all things product knowledge and support. From there, they implement all they learn into their in-house lessons to ensure there isn’t a problem that rolls through their doors that can’t be fixed. 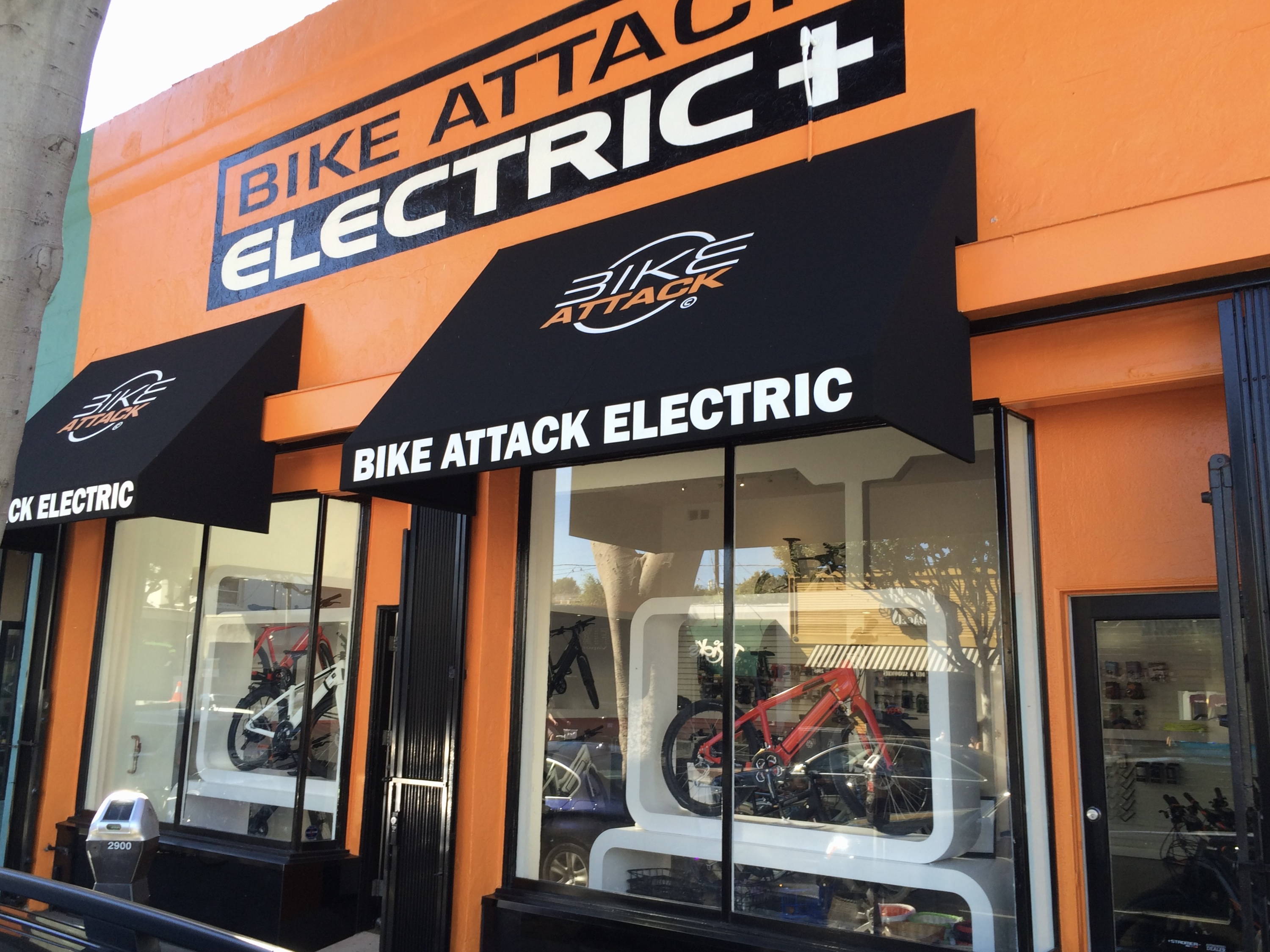 Kitty’s Favorite Part of the Job

At Bike Attack, customers come first. Located in the heart of two of Los Angeles’ most iconic towns, and in the business for decades, Bike Attack has welcomed countless riders of all interests and needs. Kitty says, “We’ve known a lot of our customers when they were kids, buying a kids bike, now they’re 25+ starting their own families and businesses. We still know them when they walk these same streets.” The connections she forms, that extend beyond simply being a consumer, are what make her happiest.

Seeing the excitement on her customer's faces about their choices makes her work not feel like work. Because at the end of the day, it isn’t always about just selling bikes. For most of her consumers, investing in a bike is investing in them; “For them, it’s really a change in their life. They start to ride every day, and go from 0 miles to 100 miles because they’re just so excited.” To be in the role of helping someone make a change in their life is the most rewarding.

Ready To Check Out Bike Attack?

Bike Attack is a leading and trusted source in the biking community and has everything needed to get you rolling, either in Santa Monica or Playa Vista. They were even voted “Best Bike Shop” by several LA magazines and awarded America’s Best Bike Shop in 2015, 2016, 2017, 2019, and 2022! Learn more about their selection of Aventon electric bikes and how to contact them for any presale, servicing, mobile repair, or rental questions. And if you’re ready to test ride an Aventon ebike or start your cruising escapades today, check out Bike Attack in Los Angeles, CA!