Aventon Rear Rack - Aventure
531 reviews
$49.99
SHOP NOW
Description Designed specifically for Aventon's Aventure fat tire ebike, this classic styling rear rack is perfect to take your adventures to the next level. Haul your essential items on your next trip whether it is to the office or the woods. The black matte design goes perfect with the Aventure....

Aventure Front Rack
201 reviews
$39.99
SHOP NOW
This front rack is specifically designed for Aventon's Aventure fat tire ebike. Get additional cargo space with this wide front rack that can easily hold a small cooler with drinks or a small picnic set up. With simple installation you can unlock new possibilities with more cargo space for your...

Kali Protectives Central Helmet
12 reviews
$79.99
SHOP NOW
Whether it's tackling the daily commute or enjoying city nightlife by bike, the Central, with its rechargeable rear light, is the helmet for your asphalt jungle adventures.Stay cool, covered and highly visible with this stylish urban helmet. **Does not come with a charging cable - Uses a standard micro-usb charging...

Aventon Tail Light W08-40A
46 reviews
$26.99
SHOP NOW
Our Aventon Tail Light offers a fast and convenient way to increase your safety when riding in low light conditions.  This tail light offers a variety of modes and attention-grabbing flash patterns. Mounts easily to your seatpost with integral rubber strap so it can be installed or removed in a...

Planet Bike Aluminum Water Bottle Cage
14 reviews
$5.99
SHOP NOW
ONLY COMPATIBLE WITH AVENTURE EBIKE OUT OF THE BOX - Will need an adapter to mount on the rest of our ebike product line. With clean lines and rugged construction, Planet Bike's Aluminum water bottle cages offer lightweight durability. Pick a color that’s right for you and stay hydrated when...

“Most Bang For Your Buck”

“I understand the demand” Our most powerful, most versatile ebike just became more accessible! With the addition of a step-through this version of the Aventure just became the best ebike out there! 4" fat tires and front suspension ensure that you'll be comfortable whether you choose the pavement or the trail, whilst the 80mm of travel in the front suspension means you'll absorb all the bumps in your path.

Boastfully equipped with a powerful 1130W (peak) motor and 720Wh battery, means that the Aventure can go further than any of our ebikes before. While the Aventure ships as a class II ebike, it can be configured into a class III with speeds. Integrated in fenders mean that you'll feel safe and stay clean even in the worst conditions. Last, but certainly not least, the Aventure Step-Through comes equipped with our new color display, which syncs to the Aventon app allowing you to store your rides and share them with your friends and the Aventon family! Easily view important ride metrics such as speed, pedal assist level, battery capacity, distance traveled and more. With the touch of a button you can change your ebikes class rating, control the integrated lights, or share your most recent ride with your friends through the Aventon app! You can also plug in your smartphone via USB cable.

Take your Aventure Step-Through anywhere with confidence! A suspension fork offering 80mm of travel, will absorb even the harshest terrain and provide you with a level of ride comfort you never thought possible out there on the trail! Integrated fenders mean that you can keep your adult-side happy whilst you release your inner-child and take on all the mud and puddles you can find on the trail!

Stay safe with lights that run off your ebikes battery. Never worry about your lights dying on you and turn them on and off with the push of a button on your handlebar mounted, color display. Stay comfortable and in control on the trail and on the road with these 4" fat tires. while on the trail these fat tires provide you with unmatched stability.

Equipped with a powerful 750W motor, you'll be taking the Aventure Step-Through on trails, roads and hills with ease! Pair that with our high capacity 720Wh integrated battery and you'll be traveling even further and discovering new places every time you hit the trail or street! No human power needed with a throttle on demand you can go as you please! But if you are out for some exercise there are five levels of pedal assist there to help you should you want to push yourself right to your limit.

A step-through frame opens up the trails to everyone! Adding a step-through frame to our Aventure ebike means that anyone who many have had reservations about the accessibility of cross country ebikes can now get out there and explore with confidence!

CONNECT YOUR EBIKE TO YOUR PHONE

The Aventure comes in 2 sizes to suit most adults. The Aventure ships as a Class II ebike, with pedal assist and throttle capabilities. It can also be modified into a class III ebike which increases the speed on pedal assist. The Aventure will also operate with the throttle unplugged and removed, should you want to ride in an area where throttles are prohibited.

Aventon ebikes are built to the IPX4 water-resistant standard. IPX4 means that your bike is resistant to water splashes from any direction. Which means it’s OK to ride or park your ebike in the rain. It won’t be harmed by spray from a wet road or raindrops. Your ebike is not intended to be submerged or subjected to a pressurized spray. Don’t use a pressure washer or sprayer to clean your ebike.

*Aventon has the right without notice to the consumer to substitute components of at least equal quality for advertised Aventon ebike components in the event of the unavailability of such advertised components. More info Just got the bikes and it’s been pretty cold so not many miles. Overall we’re really happy with them, looking forward to spring and racking up some miles.

Really like the throttle and just being to effortlessly glide along at 10MPH using pedal assist. I’ve had it up to 32MPH!

Bikes were super well packed and were completely undamaged. My bikes battery was a bit “wonky” to turn on so I texted with Aventon. They walked me through a few things and determined I needed a new battery. They sent one out no issues at all. They stick by the product.

I got several emails from them along the way informing me of the battery shipping status. 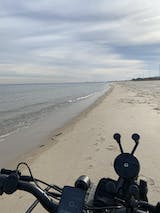 I previously commuted daily 10 miles RT to work on a non-electric cyclocross bike in SLC, but just moved double the distance away. This makes commuting much easier. It’s about 10 miles and 900 feet elevation gain to get to work, and this thing takes it like a champ. It’s essentially an electric moped. You can get as much of a workout as you want, and I pedal hard to reduce strain on the bike, but I could also get there in the same amount of time without sweating if I wanted to. With the racks, it carries everything I need and the upright posture with fat tires and front suspension ride like a dream. The cold temperature definitely affects battery range, but I probably wouldn’t have any range anxiety (without charging at work) unless I moved >15 miles away. It goes great in the snow and ice and I haven’t needed snow tires yet this year. I haven’t taken it on any trails, but it would probably do just fine. However, you’re probably not going to have fun riding this beast on single track with really tight corners. The lights are ok. Front light is bright, but I’ll need to aim it higher. The rear light gets covered by my panniers, though, so I had to put my own blinky on. Mechanically, it seems well-built, with simple but high quality components (for the price). The cadence-based PAS is sometimes unpredictable, but you’d probably have to spend a lot more for a mid-motor bike with this much power. So long as you don’t draft behind cars at intersections (which you should never do), it’s not much of a problem. This is a no-brainer commuter car replacement if you live within 15 miles of work, no matter the climate or road condition. I think the future of commuting is e-bikes like this one.

I used to be a bike mechanic, and my Aventon Adventure is an impressive build for sub $2k Electric Bike. The position of the rider is much more like a motorcycle position, and seats quite comfy. I had enough of Mountain Biking and uncomfortable position for hours. I wanted to no just have fun, and enjoy rides and scenery without so much work and workout type effort. I'll just go work out for that. Components actually solid for what I needed, disc brakes excellent, and power levels as powerful as I need. Really cool you can convert the bike to be full pedal, or pedal assist, or use throttle with simple switch. Rides smooth and sticks to trails solid, fat 4in tires stick, plus the weight. Yes, its a bit on the heavy side, but i love it actually smooth ride. Need 2 people to lift into truck, but can lift over trail heads if needed. Less than a month and 100 miles already on it. Can cover 20 miles easy in a breeze. Thanks for the fun!

In a world where customer service seems like a rarity Aventon always responds quickly and solves any issues. Great bikes, great service!