Reyna has always loved biking, fostering animals, and anything that involves being in the great outdoors. Born and raised in San Marcos, California, she grew accustomed to San Diego County and its abundance of places to explore, from snow to sand, and anywhere in the sunshine! Though she struggled with asthma from a young age, she never let it keep her from doing what she loves.

As her asthma worsened over the years, it eventually impacted her overall strength and ability to bike ride for longer distances or through grueling terrains. She began to look for more creative or innovative ways to remain active without jeopardizing her health, like exploring the world of electric bikes. Her search for an e-bike would inadvertently allow her to share her passion for biking with her best bud, Woody, eventually becoming a local icon in their own community! Here’s their story of how an unexpected foster turned into the adventure companionship of a lifetime, with ebikes helping both Reyna and Woody overcome the adversities they faced. 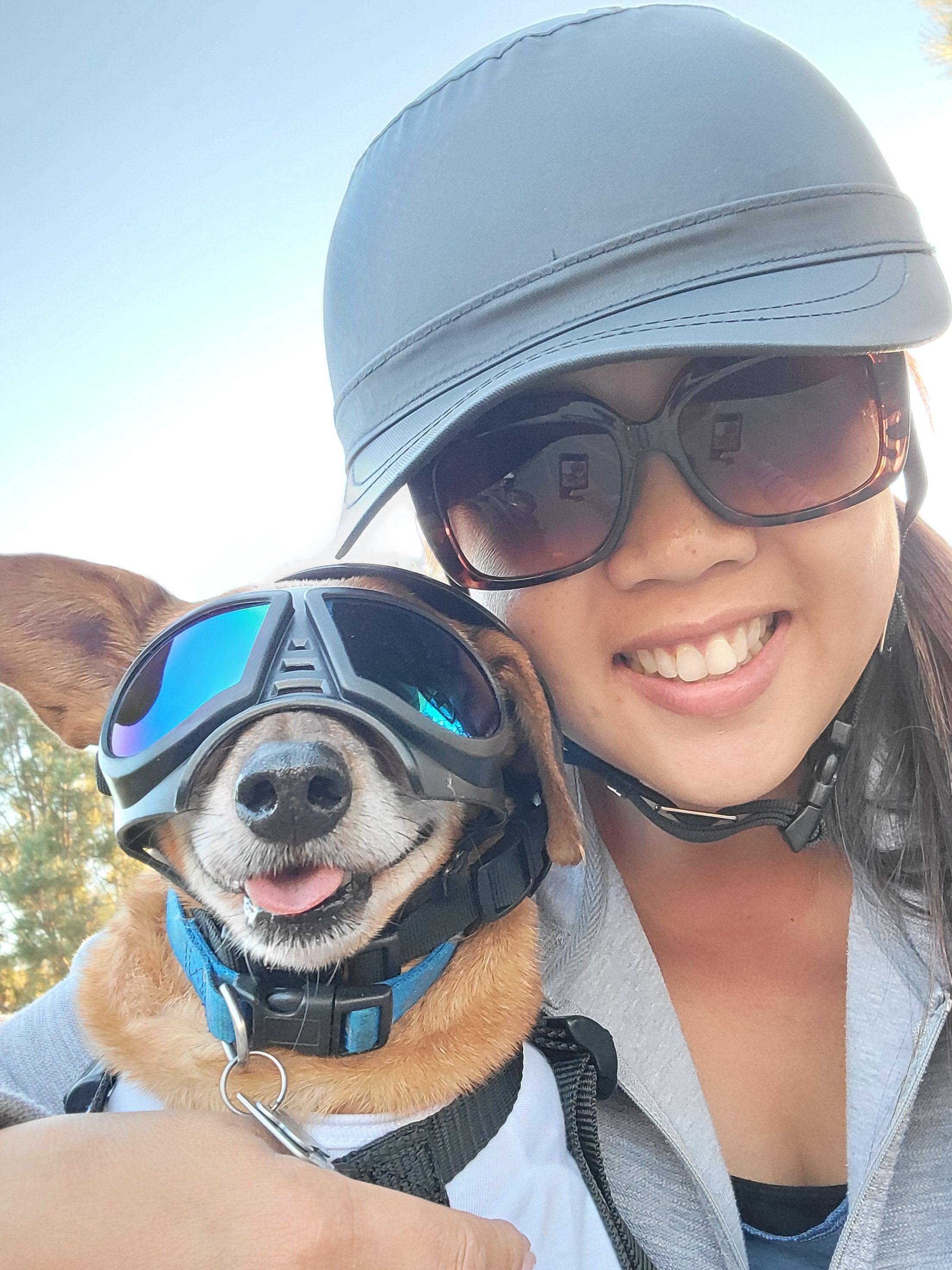 Woody the Weiner Dog: From Death Row to Adoption

Reyna is an advocate for fostering animals, with her specialty being Weiner dogs. Contrary to popular belief that Weiner dogs are always fun and friendly, she says they can have moderate temperaments if in the wrong environment and are typically not a kid-friendly breed.

Given his traumatic upbringing and fear of children, Woody was considered a foster failure after unsuccessfully being fostered twice. When Reyna was considering fostering him, she was initially told that Woody isn’t adoptable given his character around children. Knowing the fate that was upon Woody, she knew she could provide a safe and loving home for him to flourish.

In 2015, Reyna officially adopted Woody after fostering him for some time. Woody was the third Weiner dog addition to her family, and as she says, “When I first brought Woody home, they would all act like a herd. He felt safe and comfortable.” Though her family of dogs has since changed, Woody feels more like himself than ever before!

Now 16 years young, his favorite hobbies are anything as they relate to the outdoors, just like Reyna! Woody loves his walks and playing ball when he can. He’s also a dancing fanatic; if he hears music, he’ll bob his head to the rhythm. He’s always been a fan of head-out-of-the-window-type car rides. But his favorite hobby of all time is bike riding with his best friend in his own personal “car:” Aventon’s white Sinch! 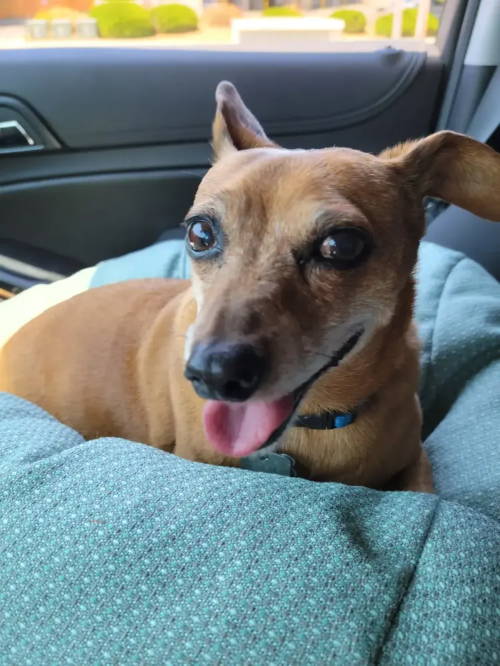 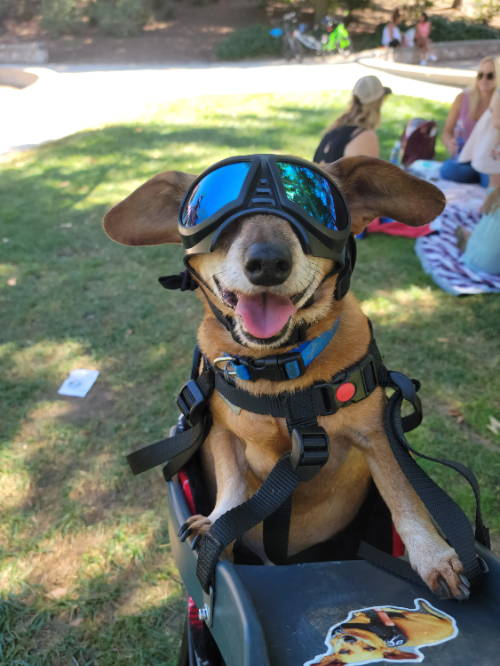 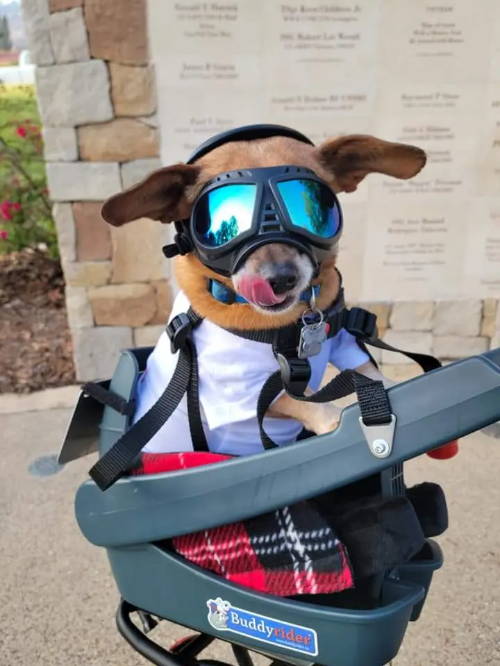 Reyna told us that she loved bike riding, but with her asthma worsening as she got older, bike riding became more cumbersome. Recently celebrating her birthday (Happy belated Birthday, Reyna!), she told us, “I still feel young! I didn’t want anything to stop me. So when ebikes came to be, I was like ‘oh my gosh!’ this is the only way I can bike and traject through life and my adventures.” An ebike was Reyna’s solution. She initially didn’t know how or where to see an Aventon ebike, until she noticed our recommendation to visit a local bike shop via our Dealer Locator page. In February of 2021, Reyna visited Bike Bling nearby her home in Escondido, California, and much to her excitement, Aventon was the only ebike brand Bike Bling had any inventory of!

She knew she wanted a fat tire ebike for all-terrain flexibility, whether she wanted to ride from grass to sand. At 5’, she wanted an E-bike that was easy to use, required low maintenance, and fit her and her lifestyle just right. The representative assisting her at Bike Bling was instrumental in providing her with advice and information about Aventon ebikes, gearing her up for a test ride, and listening to what she needed out of a bike.

That same day, she rolled out with her first Sinch in black! The very next day, she went back for a white one that way she could enjoy biking with company. While her Sinch ebike has since lived up to the expectations set by the sales rep, in hindsight, Reyna’s favorite thing about her ebike is the unique look. She says “it doesn’t look like any other fat tire ebike that’s out there. The way that the welds are built. The design. The tires. How sturdy it feels. How it’s put together. You can just tell there’s quality. It’s a great-built bike, and I like the fact that I can travel with it.” And travel, she does! 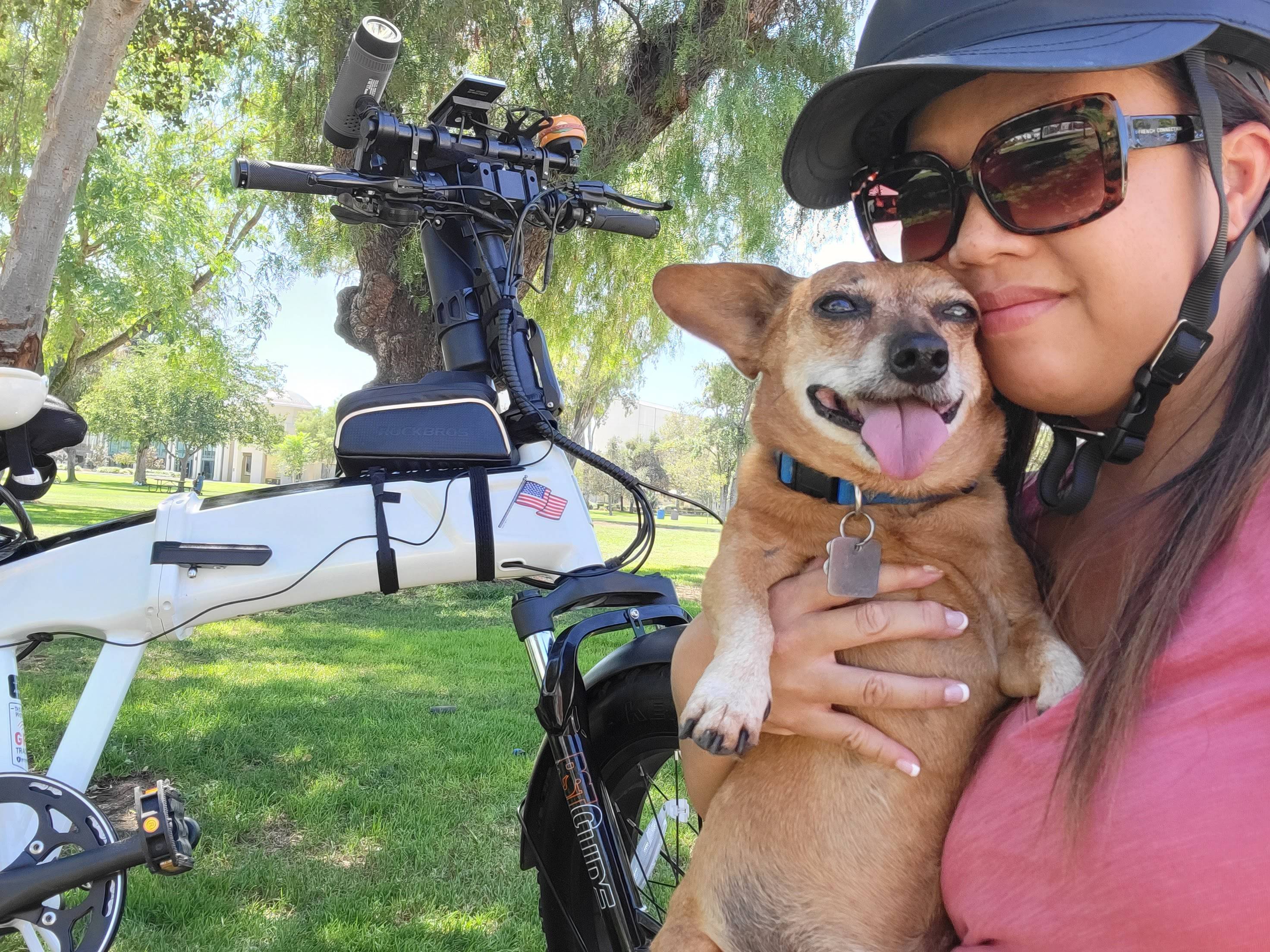 How Woody Reacted to the Aventon Sinch

At 16, Woody isn’t able to walk very far or for very long, so Reyna thought to herself, “why can’t I take him with me to these parks and trails, let him do his walk, and then take him back?” She started to research how people would bike ride with their dogs and found a dog seat to secure to the center frame of her ebike. It, unfortunately, didn’t work out the way intended. She would still put Woody in the dog seat and pull him around the kitchen floor, which he’d really enjoy! When she saw how much fun she had in that seat, she knew somehow she was going to make it work. Fenders, a rear rack, and some safety seat testing later, she never thought Woody would take to the ebike so quickly, let alone embody the whole persona with goggles, helmet, and clothes. Now, he correlates the white Sinch bike as his since he’s off and on it so often!

It took a few trials and tribulations to discover what they needed. Woody initially didn’t have goggles. Though he had a blast on his first few rides, Reyna noticed he’d be squinting his eyes a fair amount. She’d also sporadically pick bugs out from around his eyes after each ride. A quick Amazon search later turned up a fashionable pair of goggles that actually proved functional: the goggles shield his eyes from wind, dirt, and debris while the UV grade lenses provide added protection.

Despite loving the wind in his face, she noticed that Woody disliked wind in his ears; He’d flinch. She found a fitted helmet that both kept him warm as cooler temperatures set in, and also protected his ears by capping them comfortably in place. Once Reyna was able to control these irritations, she says “We took to the seat and we literally just rolled.” 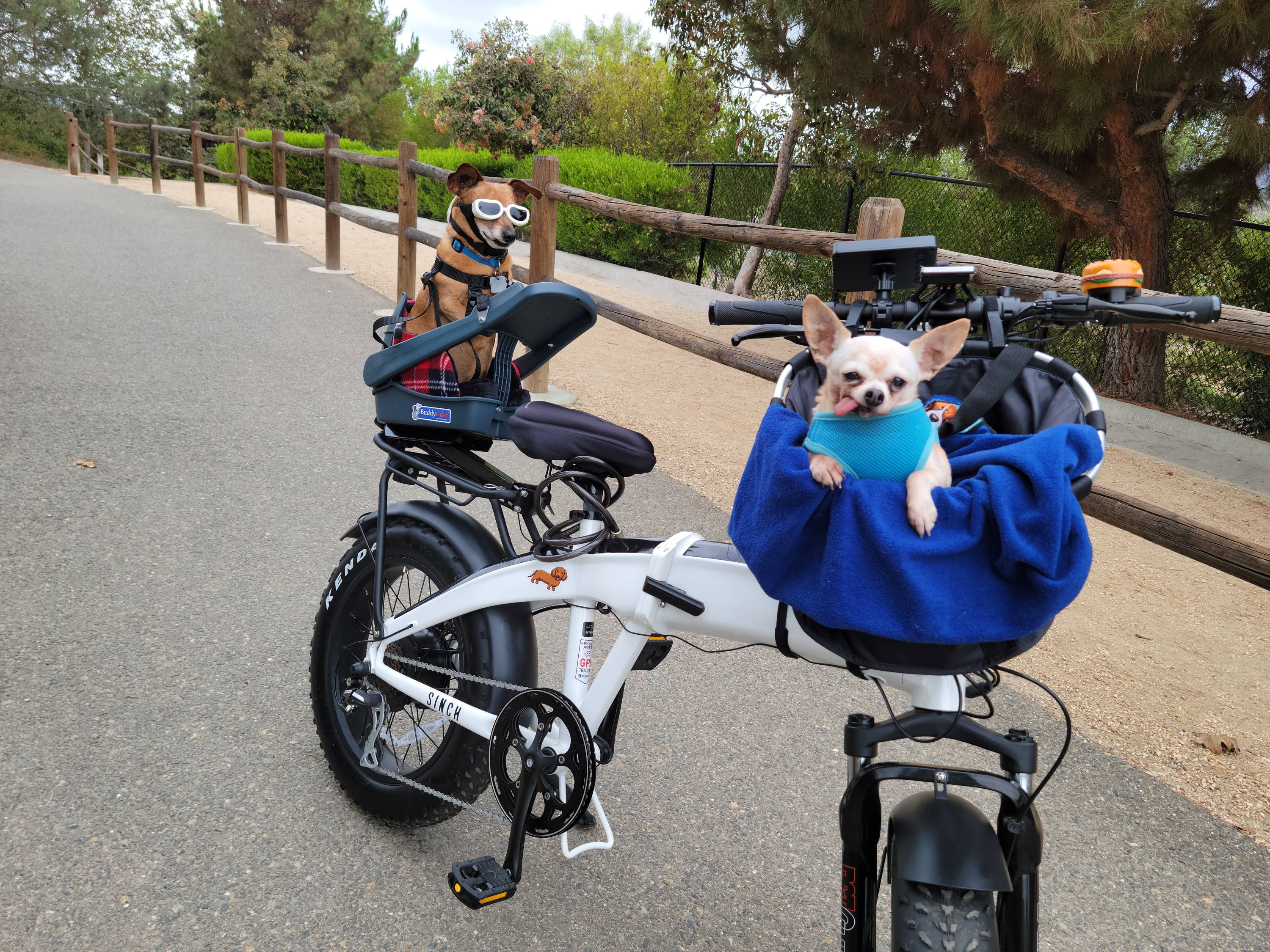 How Ebiking Has Affected Woody

Reyna thinks that ebiking has just helped Woody to be more in his own skin. She can tell that he is comfortable just as he is and he’s discovered his footing. The moment he notices Reyna grab their helmets, his ears perk. When Reyna washes the Sinch ebikes, he’ll sit right next to the white one the entire time. If he wants to go on a bike ride, he’ll stand right next to it. In his eyes, the bike is his own, and it's almost as if he’s relaying, “This is what I wanna do!”

Despite splitting her time routinely between San Diego County and Orange County, Reyna makes every attempt to bike ride once a day with her riding partner while she’s in San Marcos. And Woody has acclimated to this schedule very well! While she’s grateful to have a bike with so much power and battery expectancy, Reyna usually rides in the lower pedal assist levels because she wants to pedal and get more exercise. Their Sinch rides typically last from 10-20 miles, frequenting both of their favorite parks and trails. Not to mention they’re somewhat of local celebrities as most people know who they are when spotted on the roads!

When they’re not adventuring on their white Sinch ebike, Reyna uses her black Sinch for errand running and commuting. Sometimes, she’ll pack her foldable ebike with her as she heads to work out of town, biking from where she stays to the office.

“Where I live everything is in close proximity and it’s just nicer to not be in the car too. Get the wind in my face. Have that fresh air and just pedal, you know? Just pedal and just go. That feeling where ‘Life is good!’ ”

More regularly, she’ll ride her black Sinch E-bike to run errands or go grocery shopping. Although, Woody isn’t a fan of running errands because that means he has to sit in a basket whereas he prefers his dog seat as it gives him a more elevated view. His favorite riding style is in his buddy seat on the white Sinch!

How Reyna’s Ebike Has Changed Her Day to Day

We consider and welcome all Aventon owners and riders as part of our extended family! As such, we think there is immense value in cultivating a community of like-minded individuals. For this reason, there are moderated community groups out there that allow Aventon riders to connect, swap stories, and just share smiles! Reyna is an active member of Aventon’s Facebook Group and shared with us just how her Sinch ebikes have impacted her overall day-to-day.

Being Part of a Community

Since participating in our community group on Facebook, Reyna and Woody get noticed more frequently around their neighborhood, and their network has grown too! Reyna told us she was riding around the weekend of Christmas when a group of kids approached her; “They saw me and knew who I was because of Woody! People tell me ‘it’s a sight to see’ when they talk about a dog on the back of a bike. But the bike on its own gets a lot of attention too. Woody is the conversation starter and then it shifts onto the bike: What is it, a moped? Where’d you get it? Was it expensive?” 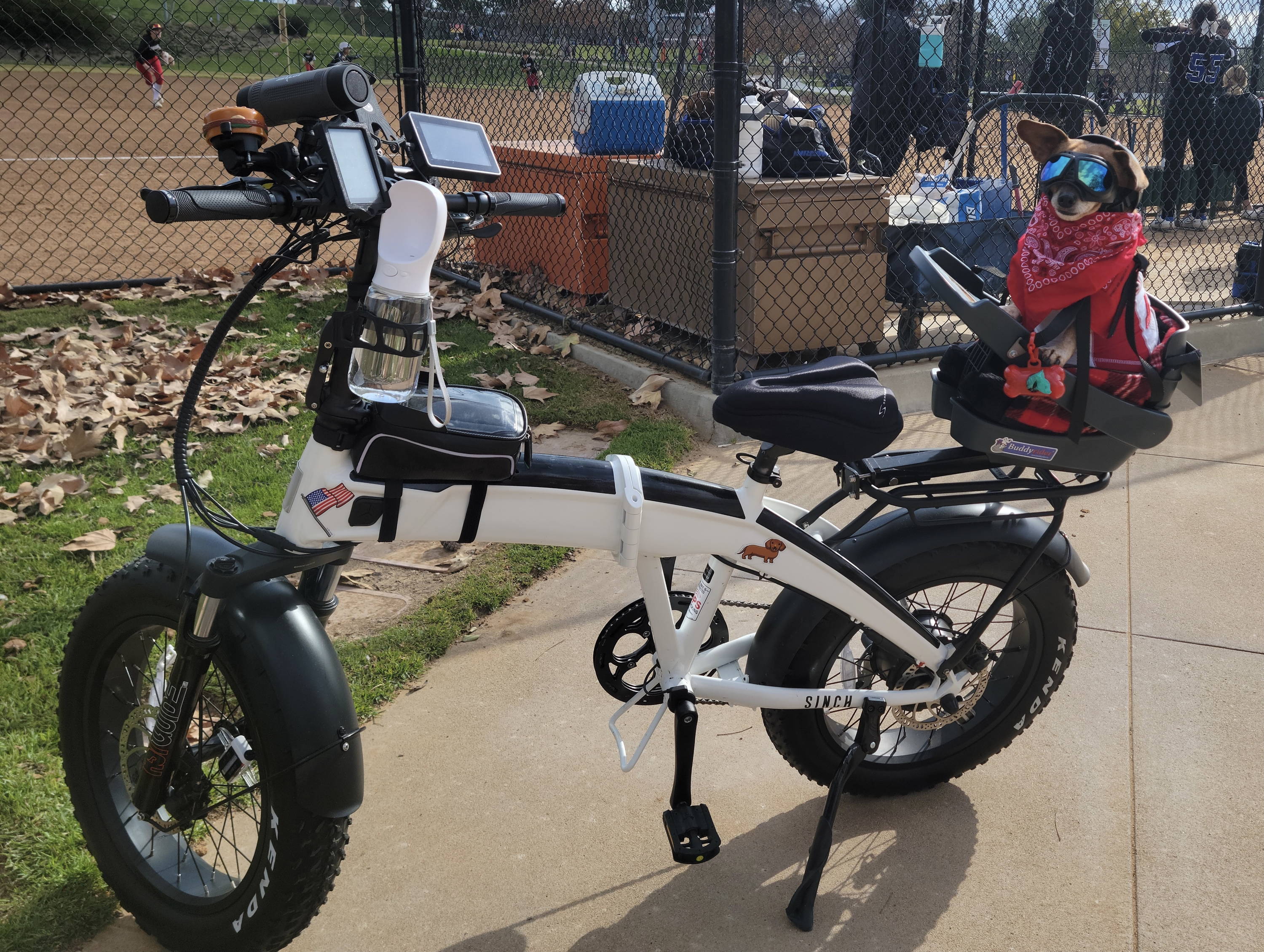 In addition to becoming a regular part of other people’s routines being spotted riding by, Reyna has connected with other bike fanatics and pet owners. The community group has become a source of connection, friendship, and sharing of resources. Reyna says,

“The group has brought me a few good friends around the US. Friendship is so global now; it doesn’t have to be face-to-face. There are people there that don’t get out much or don’t have a lot of social friends. And this is what someone needs. Just someone to encourage them. To say, great ride or great pictures! It’s nice that someone cares about what you care about.” 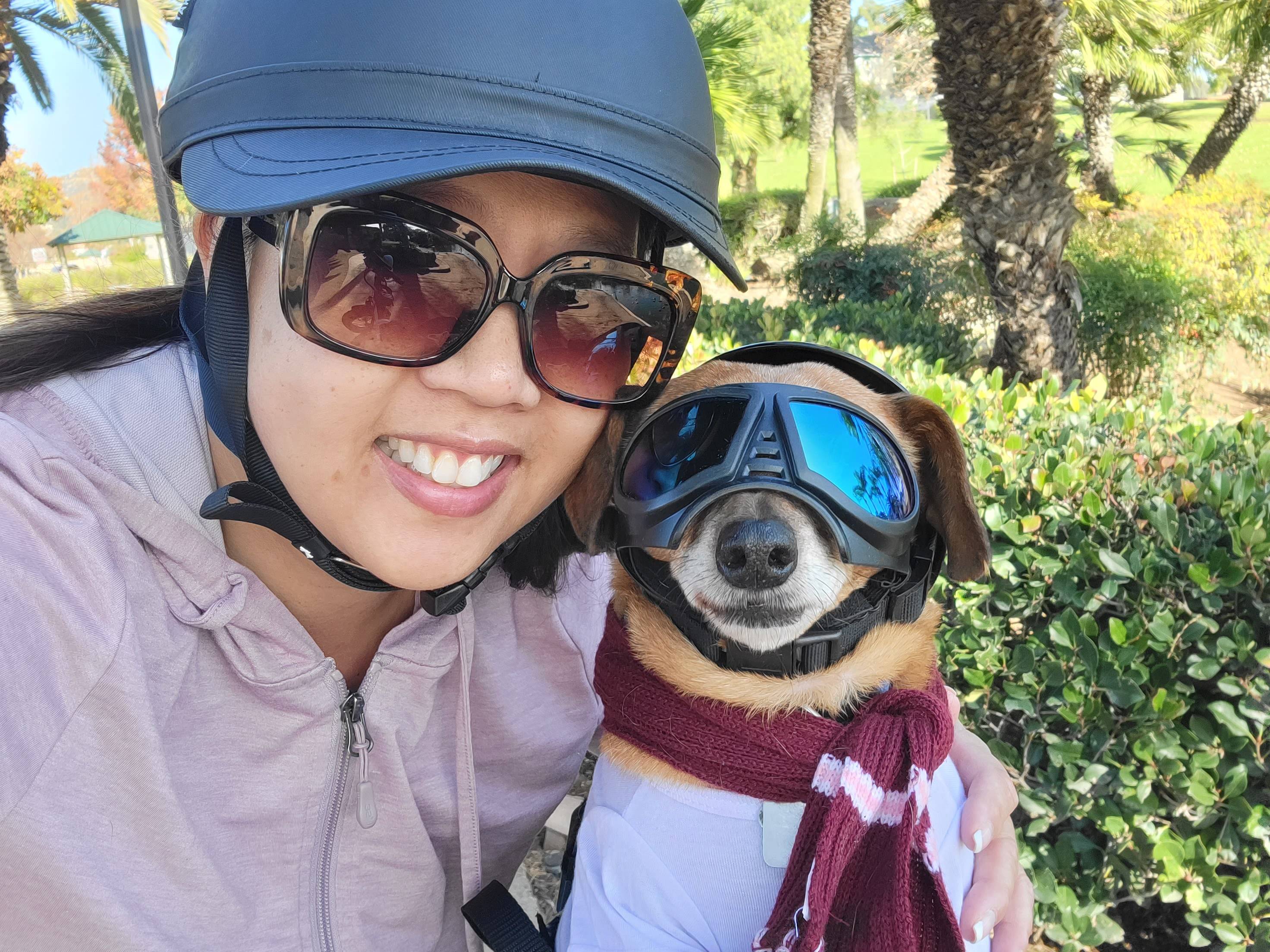 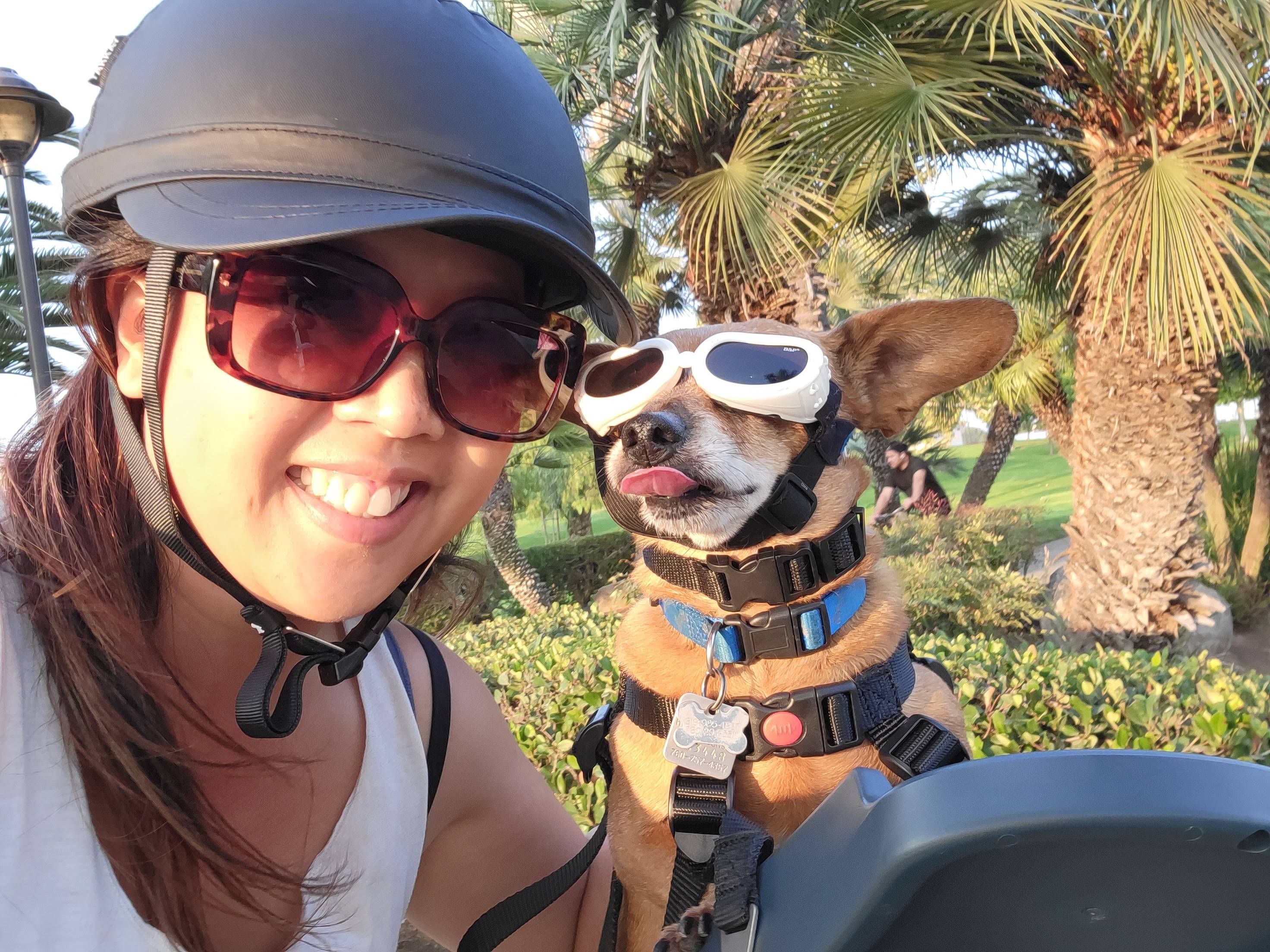 Tales like Reyna’s and Woody’s are the reason we do what we do at Aventon, and even more so, why we love it! Knowing the impacts our ebikes have on both people and their furry friends alike is what continues to fuel our mission to make mobility more accessible.

All of us here at Aventon HQ adore seeing Woody’s adventures shared on Facebook. And, it wasn’t until one of our stellar support agents, Andrew C., who escalated an idea to us, that was born out of a support inquiry from Reyna, that turned into an unforgettable meeting. We’re thrilled to have been able to share Reyna and Woody’s story with you all, and spread some smiles from the photos and tales they’ve shared with us throughout their trails and tails adventures! And to close, we want to thank Andrew C. for going above and beyond to build and maintain Reyna’s trust in Aventon and recognizing how impactful their story would be to share. Until next time, keep up with Reyna and Woody’s adventures on Aventon’s Facebook Group!

We love them both!!! Thanks to Woody our dog now rides with us. These 2 are my inspiration and hero’s!! ❤️❤️❤️❤️

Great story! I am looking forward to adventures with my little dog on my Aventon Pace 500. I have a seat that I plan to use, but I’m intrigued by Rayna and Woody’s rear-rack-mounted seat. What make and model is it?