The History of Electric Bikes

The word ebike has been in common use since the early 2000’s but when were electric bikes invented?

The Beginnings of the Bicycle

We covered this topic briefly in a piece we published in March for Women History Month: Women in Cycling, and that was to explain how the birth of the modern bicycle set the stage for the emancipation of women from the societal norms by which they were suppressed and the domestic sphere within which they were confined.

Bicycles first appeared in the latter half of the 19th Century and the most popular version of a bicycle was the “High Wheeler” or “Ordinary”, a.k.a the penny-farthing. Before this, lever and geared tricycles were the most popular forms of wheeled transport; besides horses drawn carts. The High Wheeler was popular because the large wheel at the front allowed the rider to travel a considerable distance with just one rotation of their legs, because the pedals were fixed to the wheel, i.e. not geared. These bikes came with the considerable danger of falling the far distance from the seat to the floor, often 5 or more feet! Hence the name of the bicycle that replaced them: The Safety Bicycle.

Safety bicycles are very recognizable because they’re so similar in appearance to the bicycles we ride today. They were first invented in the 1870’s but didn’t catch on until certain technological advances, specifically direct steering and gears, were added. Since it’s rise to stardom in the 1880’s and 1890’s the safety bicycle has gone through many evolutions and modifications, including many attempts at electrification, making them a prototype of the first electric bike!

The Evolution of The Electric Bicycle - Part 1

The first part of the evolution of the ebike follows the “bicycle craze” of the late 19th Century, which arose from the birth of the safety bicycle. This part of electric bike history can be traced through patents registered with the US patent office, and it is these that we will use for reference here. As to who invented the electric bike, it all begins with two men who tested models of motorized electric propulsion on tricycles, on opposite sides of the Atlantic, 10 years apart.

Gustave Trouvé and The Trouvé Tricycle

In 1881 Gustave Trouvé wanted to experiment with electrical power and tricycles and he did so by taking a British built tricycle and incorporating an electric motor into it. He tested this in in the city of Paris and, although the test was deemed a success, he was unable to get it patented.

Undeterred, he took his idea and modified it to power his boat up and down the Seine river. He managed to patent that invention and is credited as the inventor of the outboard motor. Perseverance pays off! 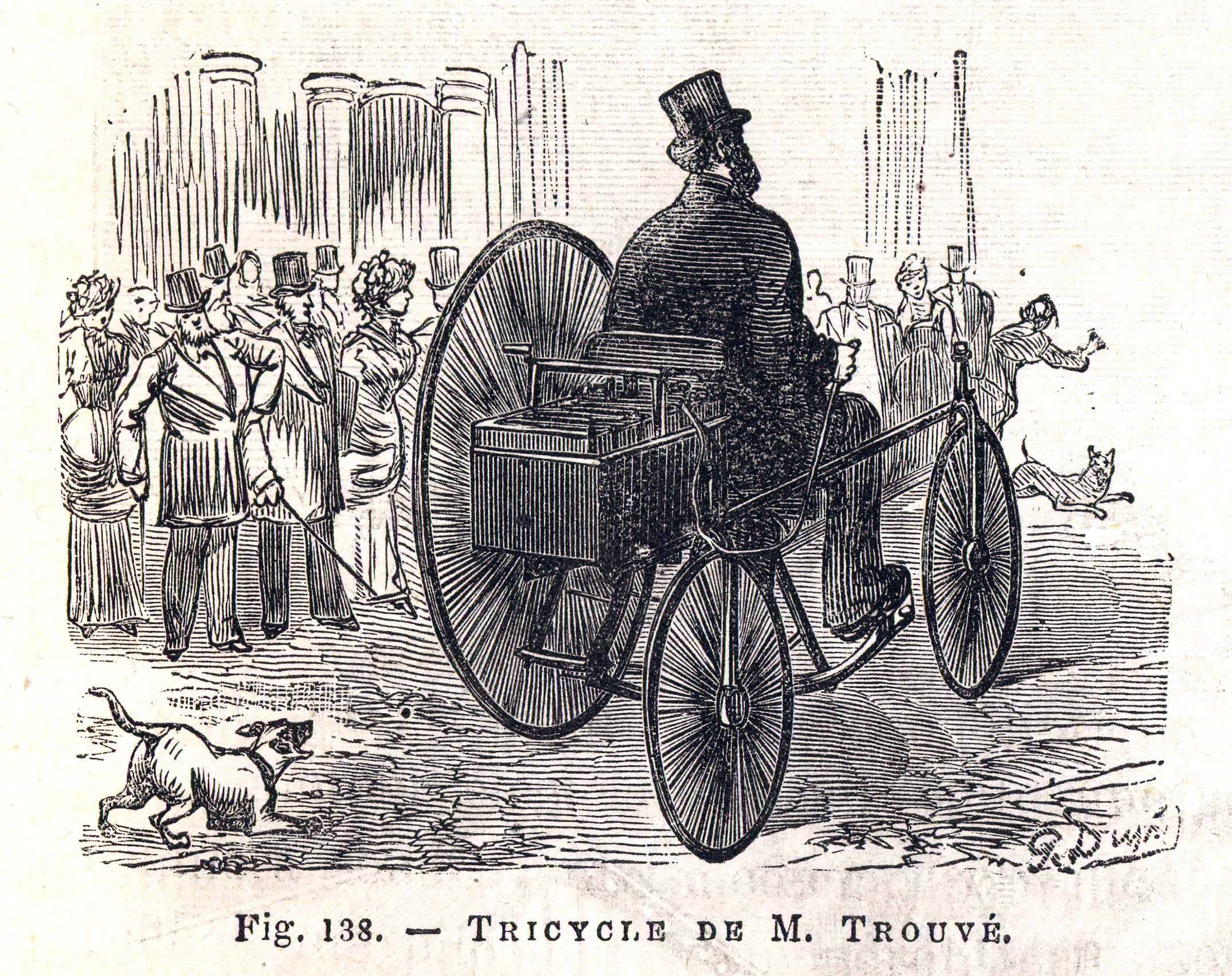 Monsieur Graffigny added a battery and geared transmission to a tricycle. Along with its rider this was a heavy contraption, weighing in at around 300lb! However, on a test track, it did manage speeds of around 12mph and covered 50 miles total. Quite impressive, but there was a large danger of falling off because of a high center of gravity.

Mr Bolton submitted a patent for what has today become the widest and most used style of motor in the electric bicycle market, the direct-drive rear hub motor. This is what we here at Aventon use in our ebikes, so you could say that our ebikes can trace their lineage all the way back to 1895!

The main difference between Ogden’s motor and the modern versions we use now is that his was brushed, rather than brushless. Besides that though there are few differences besides efficient modernization; Ogden’s was also made to be water and dirt proof, the speed was controlled from the handle bars, and the battery hung from the frame between the biker’s legs.

Another hallmark in the electric bike history is the Charles Theryc and The Planetary Geared Hub Motor. It might be a little bit of a mouthful but Charles Theryc’s patented invention introduced a motor which could run faster than the wheel it was powering. Just a year after the introduction of the direct drive rear hub motor someone was already putting in a patent to improve on the functionality of it and this style of motor still remains popular today.

It is good to note that Charles Theryc developed this engine for any vehicle but specifically had the bicycle in mind. The planetary motor is still used today for a wide variety of purposes, not just in vehicles.

Another year and another patent for an electric motor for a bicycle, but this one was the first to be located where the pedals go; becoming known as a mid-drive motor. Locating the motor outside of the wheel meant that the motor could move much faster than the wheel. It was attached to the wheel using chained gears, the same as we have today, allowing the rider to multiply the power of the system and obtain great speeds. This meant that the motor could be smaller than the hub motor but still provide a lot more power to the wheel.

Such a design also moved the weight to the middle of the bike offering more stability for the rider. If you look at the patent closely you may realize that there are no pedals attached to it, leading some to claim that this is not an electric bicycle, but more of an electric motorbike. We'll let you decide on that one, but we will say that mid-drive motors have been, and still are, quite popular for ebikes throughout their history.

John Schnepf and The Friction-Drive Motor

This motor was quite different from the ones mentioned above because, instead of driving the hub of the wheel -like all popular bikes and ebikes do today- the motor powered a roller which pressed against the rear tire and used friction to drive the power to the wheel. You can view the original patent here.

These motors have a few setbacks when compared to the other styles including being louder, more visible, and not working as well when the tire gets wet. They are, however, very popular amongst build-your-own enthusiasts as they are easier and cheaper to find and build.

The Evolution of the Electric Bicycle - Part 2

So, when did e bikes become popular? All of the above progression in the world of electric bicycles seems like it would have led to a rise in the popularity of this as a form of transportation. Unfortunately, with the advent and mass production of motor vehicles, electric bicycles fell by the wayside. From here we have to fast forward around 100 years, to the turn of the 21st Century, in order to see the technological advances which would launch the electrical bicycle into the huge rise in popularity it is experiencing now. What were these technological advances?

Battery technology - Lead acid batteries, the type which start your fossil fuel powered car, are heavy, cumbersome, and having these on an ebike was not overly practical. Lead acid batteries do not provide as much power as modern Lithium-Ion batteries.

Lithium-Ion batteries, commercialized in the early 90’s, offered an increased capacity along with more power and, importantly, they do this whilst weighing a lot less than their lead acid grandfathers. This lightened ebikes and gave them more power and a larger range, making them much more appealing to a much larger segment of the population.

Sensors and Microelectronics - These items are essential for the modern ebike and without them many of the functions we use and love, such as: different levels of pedal assist, battery level monitoring, and electronic speed monitoring; would not exist. Such functions have arisen from the technological boom we’ve seen over the past few decades and would have been unheard of 100 years ago, during the first era of ebike evolution.

These technological advances help not only to provide increased functionality and more options to the rider of an ebike, but they also greatly help increase the safety of riding one. Such a topic is even more prevalent in today’s bustling society.

Pedal Assist - In 1989 Michael Kutter invented one of the most important progressions in the modern world of electric bikes, the “Pedelec”, standing for Pedal Electric Cycle. This is a function we now know as pedal assist and his idea was to have the motor start running once the rider began pedaling, negating the need for a throttle. Before his invention everyone had always used a throttle function, without using the pedals (which is where some would argue that many of the previous designs were for electric motorbikes, but we’ll let you be the judge of that one).

Michael first put this on a personal bike before helping a company create a commercial version in 1992. Since then pedal assist has become quite omnipresent in the ebike industry, both as an assistance and a safety function.

From Then Until Now

The early 90’s saw the re-invention of the electric bicycle and in the early 2000’s ebike became the term to be using. Thanks to the many benefits offered by ebikes and various new accessories, we’re seeing an ebike revolution as their popularity has steadily grown for close to 20 years, with no current sign of abating! 130 years after the safety bicycle began the first bicycle craze, you could say that we are now entering a worldwide ebike craze as people in the 21st Century clamor to get themselves one of these trendy, environmentally friendly modes of transport.

I love my Level. It has changed the way I look at cycling. I have a “road” bike and do enjoy riding it, but that is always an event. It requires “suiting up” and then planning a route. Having an Ebike brings me back to my youth, a time when I would just jump on my bike in jeans and sneakers and go. No planning, no special attire, just go. Hills don’t exist, I can even show up at my office 20 hilly miles away and not look like a mess. You can’t beat it. I still road bike, its a different mind set, but now I have an anytime, anywhere ebike.

And as a shameless plug for Aventon, the Level is the best looking commuter out there.
Thanks!

Thanks for the electric bike history. I think there is enough development in the last 20 years to make a sequel that takes the designs up to today.

Hello all at Aventon,

I just wanted to let you know how much I enjoy the many helpful and interesting articles you share with those of us who’ve become such willing advocates of your company and its magnificent bikes. This article was as beautifully crafted as my Aventon Level which has been a source of sheer joy for over 1320 miles in the nearly five months since I purchased it. I wish you all the very best in all things. Thanks for being the company you are.