Janah’s Story: Refusing To Let Cancer Keep Her From Biking

It all started when a comment was left on a recent Aventon customer spotlight blog post, which talked about how a Pace 500 ebike totally changed the recipient's day-to-day life. The message resonated with Janah Trent, a cancer fighter and survivor, living in Maine. Although, her experience was somewhat different.

In her comment, Janah briefly mentioned how an out-of-the-blue stage 4 ovarian cancer diagnosis almost robbed her of her ability to remain physically active. It wasn’t until her family surprised her with an Aventon Pace 500 that she was able to rediscover herself and reclaim her fiery spirit. Sensing that there might be a significant underlying message that aligned with what drives us forward, we hoped to hear more about her. In an interview, Janah vulnerably yet courageously opened up to us about her life before her diagnosis, her decision to choose life and fight to overcome her cancer battle, and how her Pace 500 ebike continues to act as a support system for her to fulfill her adventurous heart. On World Ovarian Cancer Day, we're proud to amplify Janah’s voice and share her story!

Life Before Her Diagnosis

Living in Kittery Point, Maine, Janah told us she was always an avid cyclist and hiker. Although her husband, Alex, didn’t always participate in her outdoor escapades, she found herself leading a cycling and hiking group that shared both her passion for the great outdoors and her determination to keep going no matter what lies ahead; She’d lead her groups most weekends, whether they were going on long bike rides one weekend or hiking 4,000-foot mountains the next! 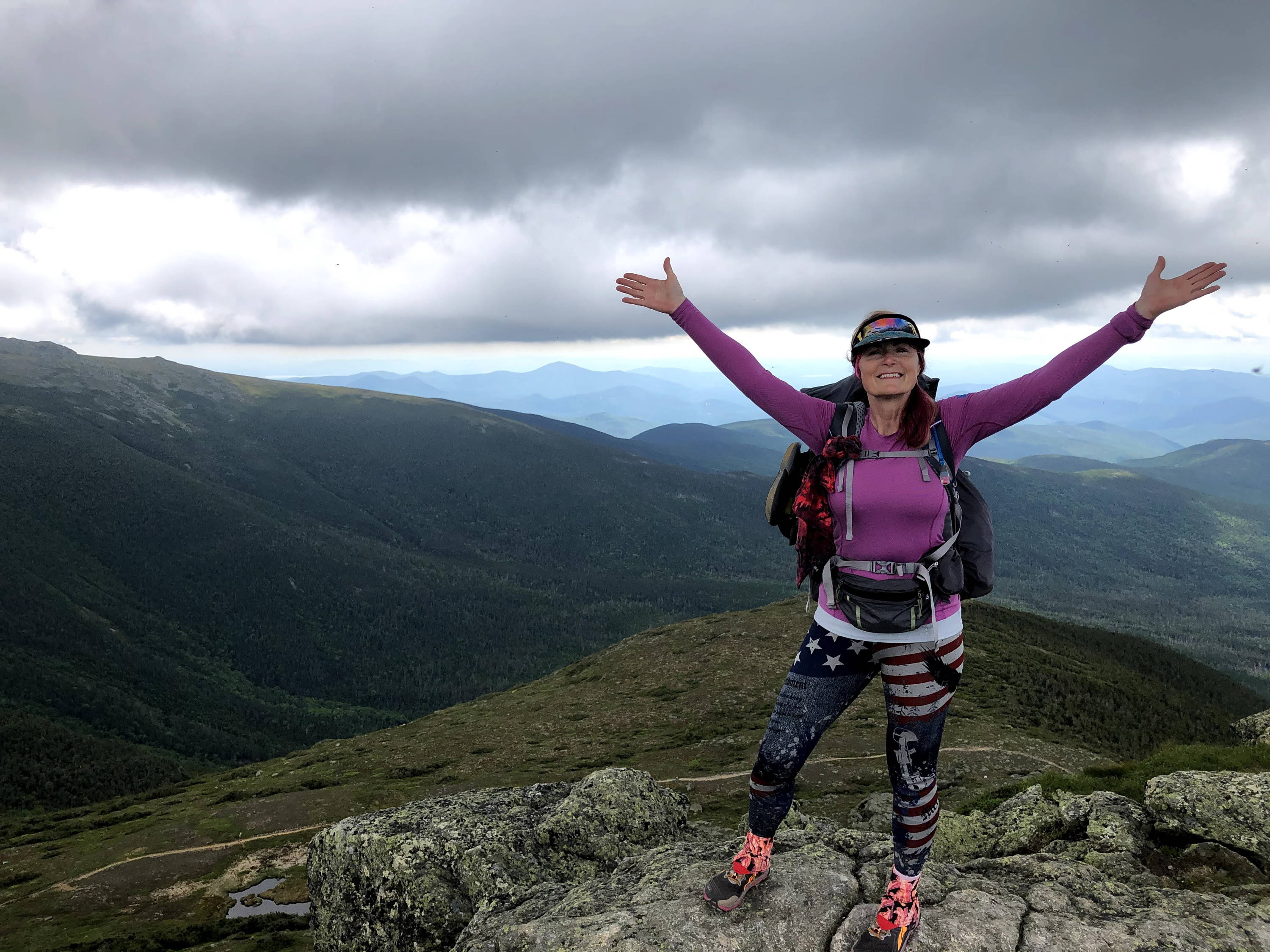 Janah told us the state of New Hampshire has an extra special activity for outdoorsy people, called Hiking 4,000 Footers; There are a total of 48 4,000-foot mountains hikers can climb in New Hampshire, and crossing something to this magnitude off a bucket list is an absolute accomplishment. Being a goal-oriented person, Janah thrived to cross one goal after another off of her list. One of her goals being to cross hiking all 48 four thousand feet mountains off her bucket list. Having completed 46 with 2 left to go, her world would soon suddenly turn upside down.

With her active lifestyle, one could say that Janah was at the pinnacle of health, which is why her diagnosis came as such a shock to her system. She told us she had no alarming symptoms other than occasional bloating which she attributed to a possible gluten allergy. So, she took the preventative measure to visit her doctor. A couple of tests and a few days later, she received the fateful phone call. On September 9th, 2020, Janah learned she had Stage 4 Ovarian Cancer which had spread throughout her stomach attaching to 9 organs, some of which included vital organs that could not be removed. Meanwhile, on September 11th, she finished the last 2 of her 48 4000-foot mountains so she could triumph in her determination despite adversity and cross that list off. That’s when everything started to go downhill.

Janah struggled to cope once the reality of her dire diagnosis set in. Her initial reaction to hearing “stage 4” and “cancer” was that her life as she knew it would be over; That all the things she enjoyed she could no longer do. She told us she was mourning her life as she knew it and wanted to put an album full of her adventures together so she could share it with her friends and family, thinking this was the end.

The effects of cancer and chemo infusions started to take a toll, from losing her stamina and her ability to walk long distances, to developing ascites which is swelling of the abdomen due to fluid build-up from cancer. Janah recalls being told there was a possibility that one day she wouldn’t wake up, and feeling like this was it; This was her near-death experience. Until one day, she recalled her oncologist telling her that activity will make the difference between life and death for cancer patients, and she decided she was going to fight for her life.

So, she continued to set goals. Even if they were smaller ones, like aiming to walk every day even if it was with a walker or viewing each chemo infusion as another “summit” to climb. She got through every single infusion until after 3 months of them, her cancer shrunk enough to get approved for surgery. On December 18th, 2020, her body was in a stronger and more stable place to undergo a de-bulking surgery, where 6 of her 9 affected organs were removed. Recovering from her surgery was a brutal experience, and for the first time, she had to fully sit back and let her body heal. Janah went on to do three more months of chemotherapy to remove any remaining particles with her last infusion being on February 23rd, 2021. Under the guidance of her oncologist, her cancer is now much more controlled thanks to low doses of daily oral chemo. However, the painful thought that she could never bike again never left her heart and mind.

Knowing how much having the ability to bike meant to Janah, a close friend suggested that she look into an electric bike and recommended visiting Seacoast E-Bikes nearby in New Hampshire. So, Janah and her husband arrived, wearily optimistic. Their initial reactions to ebikes were utter shock at the sticker prices; Janah test rode several high-ticket ebikes but didn’t fall in love. Then she spotted the Pace 500 in Celeste, and after test riding, said there was absolutely no comparison. There was so much get up and go with the Pace 500, especially with the throttle assistance, that she knew she had to have it. Especially since it was love, at first sight, seeing the color for ovarian cancer, teal, on an ebike. On April 27th, 2021, both her cycling and cancer worlds collided as she purchased her Pace 500!

How Janah’s Pace 500 Reignited Her Spirit

Janah couldn’t put the feeling into words getting back on a bike when she thought she’d never be able to bike again. Although she needed more assistance when she first started cycling, she still began by setting small goals. Starting with biking up to 10 miles a day while using as much PAS as she could, gradually decreasing her levels to get more of a workout. With the Pace 500’s customizable PAS system, she was able to play with her ebike to discover how she could get the best workout in or get more help for off-days. Now, she’s back to leading her biking groups, going anywhere from 40-60 miles on her ebike with still battery to spare. She’s even had to have her husband pick her up, miles away from her home, on days where she just started to pedal and didn’t stop until there was no juice left!

Janah told us her ebike, named Teal Tina, continues to amaze her with the amount of power and quality that it has, and when the Aventon rider (like Janah!) is just as powerful as their ebike, the possibilities truly are endless. From when she purchased her ebike until the day she had to store it for the winter, her goal was to ride 400 miles. On November 18th, 2021, she was 5 miles away from her goal. Telling herself, ‘Tonight’s the night,’ she set up, rode to the beach, and hit her 400-mile goal, crying tears of joy that she was able to achieve it.

Before her diagnosis and her Pace 500, Janah would be so focused on the road ahead, forgetting to look around her. She told us that now, she makes a conscious effort to look at the views when she’s biking while making sure she goes to places she’s never biked to before. While biking to new places was once out of her comfort zone being a cancer patient, her oncologist's recommendation to add a sticker to alert others of her medical condition made her feel much more at ease. Now, she rides all over and says that her Pace 500 makes her feel safe in addition to the difference it made in her life.

The Importance of Goal Setting in Janah’s Cancer Recovery

Janah’s goal-oriented personality and determination to achieve goal after goal was a big factor in not only her fighting back against her cancer diagnosis but also winning back her life post-recovery. On February 23rd, 2022, the one-year anniversary of her last infusion, she took Teal Tina out of storage and rode to the beach again despite freezing cold temperatures. It was a journey of realized resilience, the ultimate act of gratitude for her body being where it is now, and an ode to her ever-determined and courageous self. 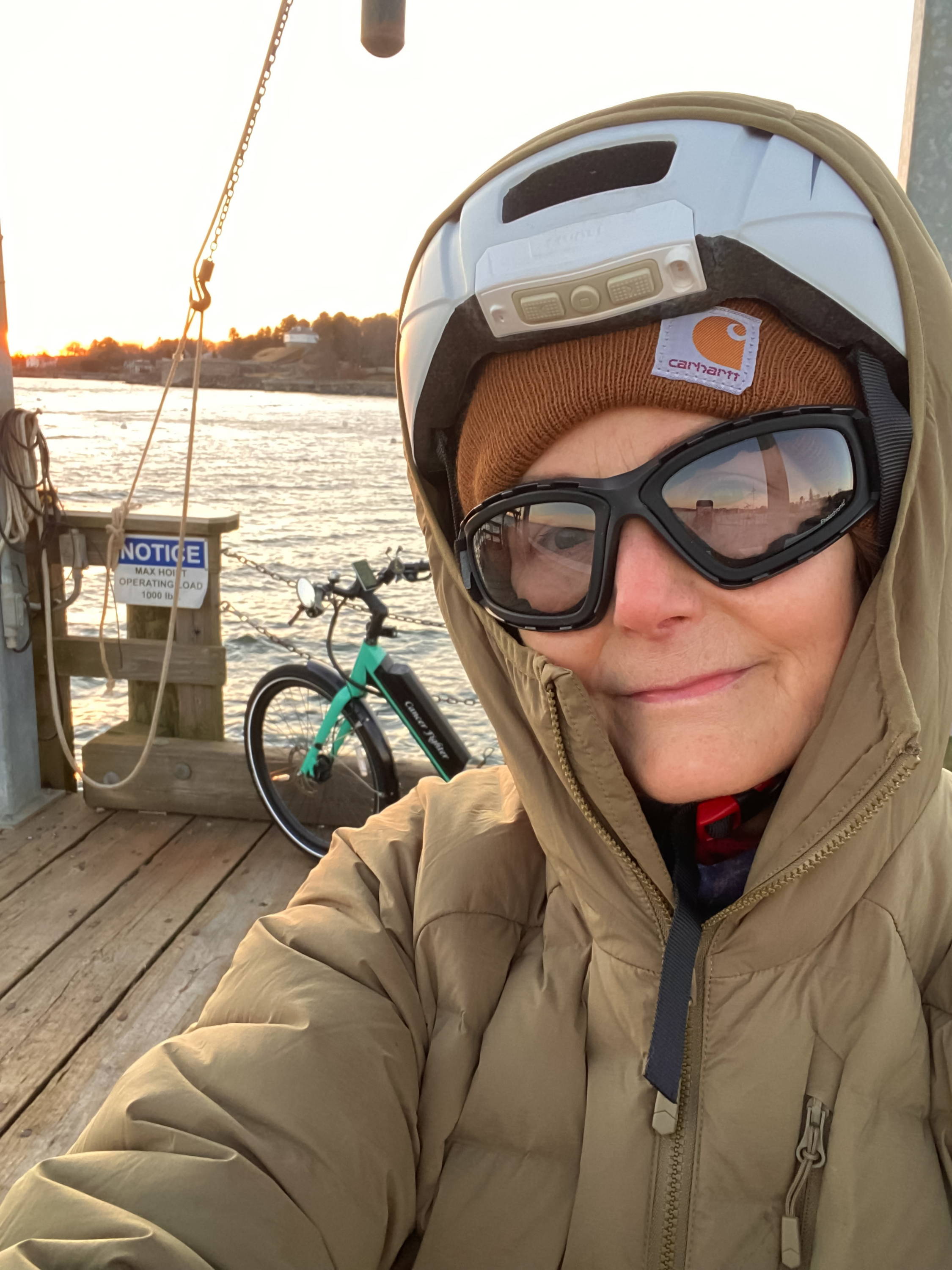 For now, her next goal is to close out 2022 by riding 500 miles and even going on an overnight backpacking biking trip with the hope of going 80-90 miles thanks to a spare battery supplied by Aventon!

Janah’s Message to Other Cancer Patients

Stories like Janah’s have an underlining narrative of the importance of resilience and courage, and how it inevitably leads to changes in growth. Janah told us that cancer patients will inevitably have bad days for years. What’s important though, is getting through those bad days and discovering what brings joy, because that will make the biggest difference not only in that moment, but in their overall journey.

Janah said that when she’s having a bad day, the one thing that makes the biggest difference to her is knowing she no longer has those thoughts that she can’t bike. The best thing about having her Pace 500 ebike is it gives her the ability to escape out into nature and heal. She said there is nothing that brightens her bad day more than getting on her bike and getting out into the great outdoors. After all, nature is inherently therapeutic and healing!

At the end of the day, our mission is to empower everyone to have the ability to move freely, and stories like Janah’s are the driving force for why we keep going and doing what we love to do. There’s no better feeling than accomplishing something you thought was out of your capabilities, and we’re proud to know our fleet of ebikes can help members of the Aventon community from all over push past those limitations and achieve their goals.

We’re incredibly thankful to Janah for opening up to us about her experience overcoming mental and physical battles to keep biking and sharing an important reminder for cancer patients all over: to never give up, despite the inevitable bad days, and to always get outside! Now if that isn’t a great closing reminder for us all, don’t forget to saddle up, start pedaling, and soak all that you can in nature at least once this week. And if you have a unique experience of your own with your Aventon ebike, leave a comment below! We’d love to hear from you!

Janah, your spirit has always shinned brightly, but never so bright as it appears to be in the face of cancer! You’re a beacon of hope and a uplifting example of what the human spirit is capable of. Shine on, my dear friend. I love you!

Great message and echo of your of passion! There is nothing like biking. As a cancer patient myself (breast), I , too use my Aventon bike to bring back my stamina and make me feel and understand the “my new me.” It invigorates me beyond words. Csncer sisters all the way! Ride on!

Cancer is a defining moment in your life and your families life. How you set goals to keep moving to beat a devastating diagnosis, shows what a strong woman you are. I wish you all the health and happiness. Your strength will and does inspire others. Like a told my sister when she was diagnosed with cancer “FIGHT LIKE A GIRL”

What a great story. Thanks for sharing.