How Much Money Can Ebike Commuting Save You?

Last year we produced a blog piece discussing why switching over to an ebike for commuting was increasing in popularity and why you should consider making the switch! Amongst skipping traffic, getting exercise, shorter commute times, and environmental friendliness there was the little talked about point of how budget friendly commuting by ebike is and how much money you could save if you chose to commute via ebike.

Let’s be clear, we’re not just talking about saving on gas money. There are a whole host of other costs hidden inside your daily commute along with other ways in which not driving your car 30+ miles every day will save you money.

The Costs of Commuting Via Ebike

Before we delve into the saving you’ll make by not using your car everyday let’s look at the outlay for regular ebike usage. Our Level Commuter ebike comes in at $1,799. This is at the lower end of the cost spectrum for high quality ebikes, and it’s a great beginner to intermediate ebike.

The name, Level Commuter, is a great giveaway, and, yes, this bike is made for the commute and beyond. This is why we’re going to use it as an example here for what an ebike can cost you if you’re using it for your daily commute. So, to start, we have an initial outlay of $1,799.

Now, If we’re going to charge the ebike battery twice a day for our roundtrip: the battery has a capacity of 672Wh (watt hours), if we divide that by 1000 we’ll get kWh (kilowatt hours, the unit in which we pay for electricity). The national average rate per kWh is 13.19 cents. so:

So if we round it up it costs you roughly $0.09 to charge your ebike! Double that because you’re charging it twice a day, to make sure it’s full for each leg of your commute, and that’s $0.18. Remember that this is the calculation of a full charge, if you’re not fully draining the battery with each leg of your commute (which you’re probably not - LEVEL battery has an average range of 40 miles per charge) then it’s going to cost you less. Also, you may be doing one of these charges at work so, all in all, you’re probably only paying for one of these partial charge cycles per day.

Even though we may be over estimating let’s continue with this number. The average American works around 230 days per year. So:

That $41.40 to charge your ebike twice every working day of the whole year. Definitely less than a year’s worth of gas!

Next there’s the cost of maintaining an ebike. If you’re commuting daily on your ebike then you’re going to want to put 30-45 minutes into cleaning it every week so as to keep it running smoothly; follow our Ultimate Ebike Maintenance Schedule & Guide to ensure you don’t miss a spot. Besides weekly cleans it is recommended that you take your ebike for a tune up around every 6 months if you’re using it as a daily ride. These cost around $100 each -so $200 per annum- but are well worth it for keeping you safe and ensuring your ride is in the best possible condition.

Maintaining your ebike includes a few items that are above just the regular maintenance costs; after all, an ebike is a finely tuned machine. After 2 years of daily commuting, you will likely start to notice a diminishing range and probably want to replace it; that’s $500. Let’s also say that your tire costs, either for replacement tubes or tires themselves, comes to $60 per year.

Now lets total it all up and break it down:

To jump straight into it, the average gas price in the USA last year was $2.396. The average one way commute in America is 16 miles -that’s 32 miles roundtrip- and the average fuel economy for cars, light trucks and SUVs is 25mpg. so:

These basic fuel costs alone top the annual outlay for commuting via ebike. Or you can look at it through the lens of: commuting via ebike could save the average American $706.10 on gas money. These gas costs are very basic and don’t include time spent idling or being in stop-start traffic (both of which increase gas usage, and therefore cost). When you’re using a car to commute gas costs are the ones you see the most frequently, but they’re not the only, or the greatest, costs of owning a car.

If you stop commuting via car then you’re going to put less miles on that vehicle, reducing depreciation and overall wear and tear. Which, overall, means you’ll need fewer oil changes, fewer repairs, less frequent tire changes, and your car will be worth more when it comes to selling it!

Let’s quickly delve into the maintenance costs for a car, and remember that these will vary depending on the size and age of your vehicle. A new set of tires can run anywhere between $200 and $1200 depending on whether you opt for budget or high performance tires. An alignment, always a good idea to have when you get a tire change, will run you around $100. An oil change, recommendations differ by car manufacturer, is usually needed every 5,000-7,500 miles. Depending on your vehicle and oil choice this can cost between $40 and $125. So already we’re at a low total of $340; that’s more than the cost of maintaining an ebike for a year! Add on intermittent battery replacements, brake pad replacements, windshield wipers, filters, and spark plugs and anything else that may go wrong with your vehicle and we’re looking at an average maintenance cost of just over $1000 per year. A number which all those extra commuter miles will just help to push upward.

There’re also the ancillary costs of driving to work which may not apply to everyone and, if they do, they’re often not included in peoples cost analysis. These costs are those of toll roads and parking. With inner city parking being very expensive and toll roads littering the regions around our cities chances are that you pay at least one of these ancillary costs in your commute. 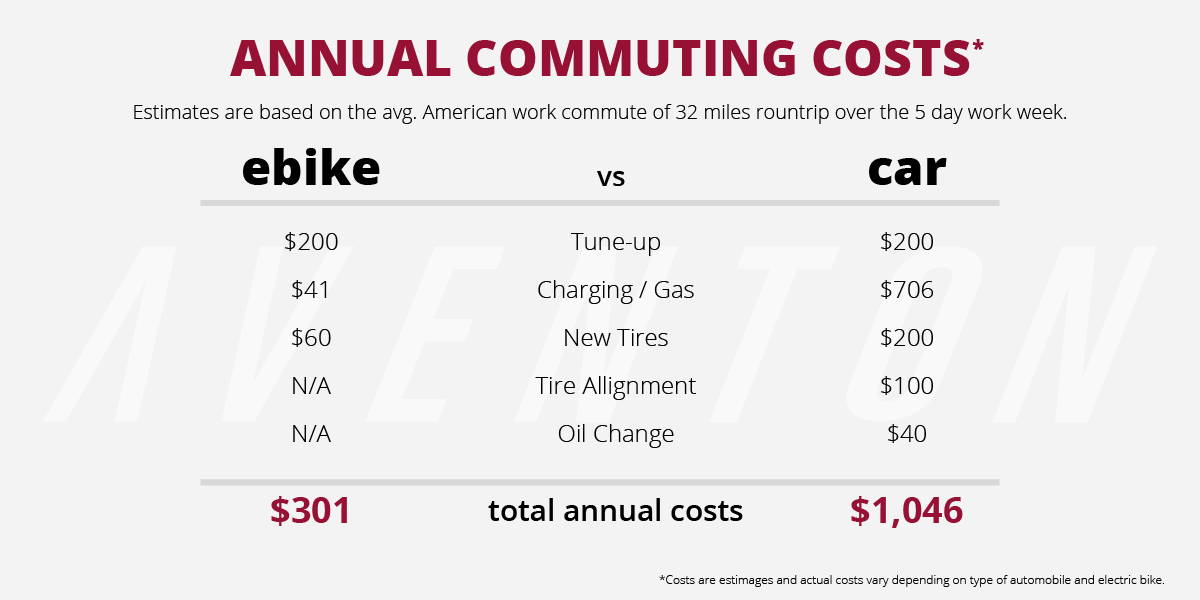 Finally, if you’re not commuting via your car and putting 7,360 needless miles on it every year (230 days x 32 miles a day)- then there’s a high chance that you can get your insurance rate reduced too.

How much an ebike can save you differs by region and by each individual’s situation. But, judging from the fact that the average cost of gas over the average commute is greater than all the outgoings required for maintaining an ebike, such simple number crunching could be enough to push people in the direction of trying to commute via ebike.

Add in all the maintenance and other ancillary costs of a car that you’ve been paying out of “necessity” for years and you may find that commuting via ebike saves you a lot more money than you think!

On top of this, there are all the other benefits we summed up in our piece last year about Switching to Electric Bikes for Commuting, such as the fitness aspect (do you now need to waste time and money on the gym when you cycle to work?) as well as the reduced impact on the environment, ability to explore, and, last but not least, the fact that by commuting via ebike instead of by car may actually reduce the length of your commute!

With it being the start of the year and everyone being open to trying something new we encourage you to try a commute via your ebike. Read our Tips for Ebike Commuting page to get prepared, pick a brisk morning, grab your ebike and see how you like the experience of ebiking to work!

I’d say that is a pretty comprehensive comparison. One thing you don’t and probably CAN’T quantify are the physical and mental benefits of riding your bike on a moderate commute on a daily basis. Even IF you could compare the perceived cost saving on Healthy life-style benefits, there’s no way you could measure the Endorphin production cost as you actually enjoy those Daily Bike rides! If your commute could include taking scenic bike paths or a more scenic route compared to a freeway drive…the benefits would be immense!

This was a great comparison and especially because you used low numbers on car maintenance For the comparison instead of having to exaggerate anything Like I have seen with other product comparisons. Realistically I think driving costs a whole lot more than what this shows, and I have even thought about the depreciation factor on my own cars as I like to ride my bike a lot of places and have significantly cut down my annual miles driven. There are also externalities that aren’t even considered in this article. Roads are paid by taxes (unless a toll road of course) and the greater the demand for roads, then the more cities and states are going to build or widen them. Roads are very expensive to build and maintain. So if enough people start biking, then in the big picture there are savings to society overall. Bikes take up less space and weigh less than cars so bike paths are comparatively cheaper to build and maintain than wide roadways. Protected bike lane retrofit project can cost more to build than shared use paths, but they will save in the long run if part of a well-connected network and used well. Biking can work well with transit if someone’s commute is longer too. I look at the Dutch cities and how they have been able to minimize the sizes of their roads by having so much of the population get around by bike. Even cities like Davis, CA; Boulder, CO; and Minneapolis, MN have seen much greater ridership as they have been continually building safer and more connected bike networks. Sorry for the long comment, but as a city planner I see riding bikes as a brighter and healthier future for us all. Even those that don’t bike can see benefits through reduced traffic congestion, better air quality, and possibly less infrastructure costs if roads don’t continually need to be widened. Ebikes open up a whole new world too as hills are no longer a major challenge! The key is getting cities and states to adopt good bike infrastructure standards and get some convenient networks built! Keep up the great work and your bikes look great too!